If I recall the moment I became the Shade - the instant - it is just that, a moment in time. But simultaneously in my memory it took years. Cast adrift on an ebon tide. Agony, bliss, icy numbness, conflagrant light, anger, calm. And I became someone new.

Richard Swift, better known as the Shade, is a former criminal who operated in Opal City, making him an enemy of Starman. However, after turning a new leaf a while back, the Shade went straight and actually became a good friend of Starman.

The Shade was born in London the early-19th Century. He married his wife Elizabeth and the couple had two sons Sam and John. Richard was a good father and a close friend of Charles Dickens. Before becoming the Shade in 1838, Richard worked as a vendor of exotic goods. 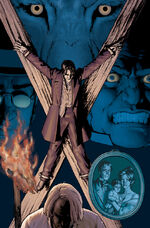 Richard Swift is granted his powers

One day, a man named Simon Culp approached him, hoping that Richard could locate and sell him a live lion. After Swift delivered, Culp double-crossed him, saying that he had a dream that he had to kill Swift in a sacrificial ritual using the lion. However, this ritual, instead of killing Swift, caused him to absorb a mysterious and magical shadow power, turning him into "the Shade" and escaping his captor. [1]

After getting his powers, Shade maintained a sense of mortality for almost 20 years before succumbing to the darkness in 1854 when the Africa-bound ship he was on was invaded by vampire pirates. After killing every single one of them, Shade found the infant child of one of the slaughtered crew members had been bitten and attempted to suck out the vampire's poison like a snake bite. Saving the baby girl from a worse condition, the vampire poison affected Shade in a way that made him lose even more of his humanity, becoming more of a inhuman shadow creature than anything else.[2]

Remaining secret to the family and descendants he would spawn, the Shade was an immortal criminal and a thief for almost two centuries. However, in 1901, while relaxing and smoking opium in Paris, the Shade accidentally bumped into his grandson Albert Caldecott who was trying to escape his lover who became possessed with a demon. The Shade combated the demon to save his grandson and returned the man to his home in London without ever revealing his true identity. While in London, that was the last time Swift saw his wife Elizabeth that he had left when he became the Shade before her death in 1904 [3]

Again finding one of his relatives in 1944, as World War II raged on, Shade made contact with his great-grandson Darnell Caldecott after the American-British patriot was captured by Nazi operatives. Shade rescued him and gave the man a slight glimpse into his shadowy past.[4]

He survived all the way into the 21st Century, battling new-age superheroes such as Starman[5] and the Flash [6], and then beginning anew. Shade eventually took a break from being a hero or a villain and instead tried to settle down in a normal life with his girlfriend Hope O'Dare.

After O'Dare suggested that Swift get back into the saddle and have an adventure, the Shade learned he had a bounty on his head, which Deathstroke among others intended to collect.[5] 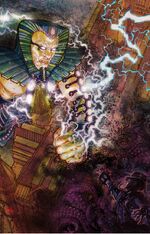 The Shade vs. Egyptian Gods unleashed in London

Finding out that one of his relatives had placed the bounty,[7] Swift visited his great-grandson Darnell Caldecott in Australia for answers. Darnell was dying of cancer but did not place the bounty, instead he requested a sample of the Shade's blood to elongate his life.[4] Visiting the vampire girl he saved back 1854, who was now a immortal superhero in Barcelona named La Sangre, the Shade approached the girl for a sample of his blood he knew she had preserved. However, this lead was a dead end and Darnell succumbed to his cancer.[8]

Returning to London, Shade discovered that his other great-grandson Dudley Caldecott was the one who placed the bounty. Dudley intended to release two captured Egyptian deities in London, hoping the terror attack would spark business in his illegal operations, and wanted to make sure the Shade would stay out of the way.[9] The Shade defeated the gods and sent them back to an other-worldly dimension. Afterwards, he murdered his great-grandson, seeing him as a disgrace to the family lineage.[10] Shade then returned to his girlfriend Hope in Opal City, content with his adventure.[1] 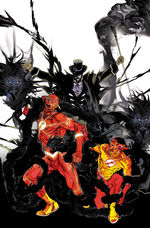 The Flash and The Shade

Returning to a normal life, Richard's relationship with Hope began to get serious. Shade was plagued by self-doubt as he believed that he would find a way to mess up his relationship. These shadows within Shade began to sense these self-doubts, and using the weakness within Richard's soul they began to break free of his control. The shadows began to instigate chaos and commit crimes on the Earthly plane, leading Richard to harbor even more doubts as he believed he could be subconsciously committing these crimes. When Hope found out that the Shadows had been committing crimes she was furious at Richard stating that he had broken his promise to her. Eventually the shadows grabbed Hope, as they believed that if Hope was gone then Richard would finally release them in his grief. Richard searched the shadowland for weeks in the hopes that he would find his beloved, however the shadows had corrupted her into their queen. Knowing that he require assistance in his mission, Richard sent a dark reflection of the loss he was feeling to Earth in order to gain the help of his old ally the Flash.[6]

The shadows built a great monument known as the Tower of Darkness, this tower would rip a gateway into the Earthly plane allowing all of the shadows to terrorize Earth. Eventually Flash's child protégé Kid Flash was dragged into the Shadowlands, and was closely followed by Flash and his girlfriend Iris West. Iris was immediately captured by the shadows who made her queen alongside Hope. Swift approached the two speedsters and explained everything that had been going on. The shades quickly arrived and kidnapped Swift, bringing him to Hope and Iris in the Tower. Richard tried to talk Hope out of embracing the darkness, however when he realized she was lost he tried to unleash all of his darkness to take her and the Shadows down. Flash and Kid Flash then arrived and offered an alternative method to defeat the shadows. Working up their lightning they unleashed a massive surge of blinding light which blasted everybody out of the Shadowlands and into reality. With the rogue shadows defeated, Shade regained his full power. With Hope free from the shadows' influence, the pair said farewell to the Flash and his friends and then headed back to Opal City to continue their relationship.[11]

Retrieved from "https://dc.fandom.com/wiki/Richard_Swift_(Prime_Earth)?oldid=2723896"
Community content is available under CC-BY-SA unless otherwise noted.