Dear God. Is this what I have become? More animal than man. When will the surrender be complete?

When Kirk Langstrom was a young boy, he fell into a deep cavern and was lost for more than six weeks. Police conducted a massive search for the child, and were nearly ready to give up when they finally found him. Though his parents were overjoyed to see their son returned to them, Kirk seemed almost sorry to leave the cave. He silently waved goodbye to the "friends" he left behind.

A short time later, Kirk met six-year-old Bruce Wayne outside of a movie theater. He regaled Bruce with tales of his adventures beneath the earth, and embellished such tales by telling him about the race of half-human, half-bat creatures he encountered.

As an adult, Kirk left his home town of Chicago and enrolled at Gotham University where he met fellow student Francine Lee. Even after all this time the so-called "cave boy" was still obsessed with bats, and he believed that he could pioneer new medical breakthroughs through the study of bats.[1]

After college, Kirk became a zoologist and nocturnal mammals expert employed by the Gotham Natural History Museum. He long admired the careers of costumed crime fighters and wanted to emulate them, particularly the legendary Batman. To this end, Langstrom developed a serum extracted from the glands of bats. This serum was designed to amplify a person's sensory capabilities, gifting them with enhanced hearing. Like many scientists of his caliber, Langstrom decided to test the serum on himself, which showed immediate results. His hands grew hairy and claw-like and his face took on the physical characteristics of a bat – including elongated ears that allowed him to perceive his surroundings via echolocation.

Dubbing himself the Man-Bat, Langstrom first went into action when a group of thieves calling themselves the Blackout Gang broke into the museum. Batman was on their trail and the Man-Bat teamed up with him to bring the thieves down. Batman welcomed the assistance, but the Man-Bat shied away when Batman mistakenly complimented him on his "disguise". As the Man-Bat ran off, Batman wondered if he had just made a formidable ally – or a brand new adversary.[2] 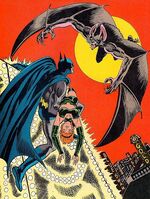 Threat of the Man-Bat

A short time later, Langstrom tried to find a cure for his mutation, but the transformation was far too advanced to stop. He quickly started sprouting leathery, bat-like wings under his arms, which allowed him to fly as a bat. As his animal instincts also became stronger, Man-Bat sought refuge and found Batman's Batcave, where he was defeated by the Dark Knight. While Man-Bat was unconscious, Batman started creating an antidote for Langstrom.[3] When Man-Bat refused Batman's help, the Dark Knight called Francine to help him, to no avail. Shortly after this, Man-Bat reached Francine and convinced her to marry him and to use the Man-Bat Serum as a proof of her love. Transformed into human bats, Kirk and Francine tried to get married on a church until Batman stopped them and forced them to take the cure to revert their mutations.[4]

Shortly after, Kirk and Francine got married with Batman as their best man, but a few days later, he had a relapse into his Man-Bat identity. With his mind altered again, Man-Bat created a more potent Man-Bat serum that would allow him a permanent transformation, but Batman prevented him from using it and provided another antidote to revert the transformation once again.[5] Months later, it was Francine who transformed back into She-Bat after she came in contact with a rare species of bats during an investigation in the desert of Las Vegas, Nevada. Robert worked with Batman to bring Francine back to safety.[6]

Aware of thet fact that Gotham's criminals were rampant on the streets, Langstrom decided to use the serum to go out as Man-Bat and fight criminals. His new version of the serum allowed Langstrom to stay in control of the transformation and with his newfound ability, he assited Batman in the capture of Roy Reynolds, "The Getaway Genius", starting his career as a crime fighter.[7]

Sometime later, Kirk Langstrom learned that the widow of a man named Moran was giving a $100,000 reward for the capture of the man who assassinated her husband. Langstrom needed the money, so he decided to inject himself with his special serum and became the Man-Bat once again. Working with Batman, they managed to bring the criminal back to America and Batman donated the reward money to Langstrom's department at the Gotham Natural History Museum.[8]

Langstrom was later forced to assume the guise of the Man-Bat again to save Francine from a sorcerer called Baron Tyme, who manipulated her using magic to murder people. Man-Bat confronted Tyme in the sorcerer's castle, where the Baron met his ultimate demise.[9]

In order to take better care of his wife, Kirk relocated from Gotham City to his home town of Chicago, Illinois. It was around this time that Man-Bat was confronted by the Ten-Eyed Man, but during the final struggle, the Ten-Eyed Man fell from the top of the building, seemingly to his death.[10] Not long after this, the Langstroms were threatened by yet another mystical being called Doctor Thanatogenos, who tried to use their bodies and capabilities as a source of energy,[11] but Man-Bat managed to stop the evil scheme for good.[12]

Following Batman's advice, Kirk and Francine moved to New York, where Kirk resumed his Man-Bat activities. With Francine pregnant with their kid, Man-Bat tried to claim rewards for capturing criminals and the first big prize came after he captured the strange criminal called Snafu.[13] After this, Man-Bat confronted the Sunset Gang, but he was unable to capture them.[14] Man-Bat confronted the gang a second time and was able to defeat them, forcing their leader to come out. Like this, Man-Bat was confronted by the Outsider, who wanted to eliminate him as part of the "Batman Family". In order to defeat the Outsider, Man-Bat teamed-up with Robin and Batgirl and together, they saved Manhattan from a certain doom.[15] 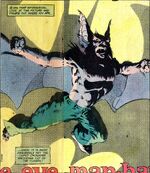 Afterwards, Man-Bat started looking for the serial killer known as Shotgun Sniper, but he was unable to find him and instead, was forced to fight the private detective Jason Bard.[16] Once Man-Bat realized that Bard was trying to help, they worked together to bring down the criminal and they shared the reward for his capture.[17]

After the last mission, Francine was about to give birth to their child and Kirk took her to the hospital. While in the waiting room, Kirk noticed a disturbance in some of the maternity room and he went to investigate as Man-Bat. There, he discovered that the witch Morgaine le Fey was transforming new-born babies into demons. Fearing for his own child, Man-Bat confronted le Fey with help from Etrigan, the Demon. Together, they managed to stop le Fey and Man-Bat, in his human form, managed to turn the witch to stone using the Philosopher's Stone. Once this was taken care of, Kirk returned to the hospital, where he met his daughter for the first time and they named her Rebecca Langstrom.[18]

After her daughter was born, Kirk decided to retire as Man-Bat and got himself a new job in a construction site. However, there were reports of a Man-Bat creature in New York, who was capturing criminals. Kirk was sure it wasn't him, but he couldn't say the same for his wife.[19] When Kirk finally learned that it was Francine who had been turning into the She-Bat, he went out looking for her as Man-Bat and saved her from Snafu, who had escaped from prison. After taking Francine to a safe place, Man-Bat captured Snafu once again, but he got no support from the local law enforcers.[20]

Wanting to find new luck with his chosen career, Langstrom sought Jason Bard in Gotham City and requested to become his partner as a private detective. Reluctant at first, Bard agreed to take him in once he learned that Langstrom was Man-Bat.[21] Together, Bard and Man-Bat became a perfect team-up, as they solved several crimes in Gotham City.[22][23][24]

When Langstrom's daughter, Rebecca became ill due to her enhanced hearing, Man-Bat stole an illegall shipment of medicines and tried to use it on her. Batman prevented the use of the drug to save Rebecca and Man-Bat worked with him in order to capture the criminal responsible, although Rebecca still didn't have a cure.[25] A while later, Man-Bat was assisted by Superman and together they found a cure for Rebecca.[26] 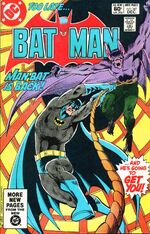 After having cured his daughter, Langstrom became obsessed with the Batman and this caused him to lose his job and his money. His family was forced to move to the worst part of town in Gotham; Crime Alley.[27] One evening, Kirk was working with his bat gland formula when he made a miscalculation in the chemical compound. Upon drinking it, he instantly transformed, but his conscious mind was consumed, replaced with nothing but raw, naked instinct. He flew off into the night and eventually returned to the catacombs that led to the Batcave.

Eventually, Man-Bat reached to the abandoned Wayne Manor and after several such instances, some began to believe that Wayne Manor was haunted. Commissioner Gordon led a search of the mansion along with Batman as well as ghost breaker, Doctor Terrence Thirteen. Batman's prevented them from finding the Batcave, but he came upon the Man-Bat who viciously fought against him. During a fierce confrontation, Batman forced Man-Bat to take the antidote, but the serum had no effect and the Man-Bat escaped.[28] Man-Bat was finally confronted by Batman once again in the caves near the Batcave, but this time, Rebecca Langstrom was on Batman's side. At the sight of his daughter, Man-Bat recovered some of his consciousness and this gave Batman the chance to inject the powerful antidote to revert his transformation.[29]

However, Langstrom was forced to take the antidote periodically in order to prevent further transformations. Shortly after, Langstrom returned to his old job at the museum, but his long hours of work consumed his mind, making him forget about the antidote. For this reason, Langstrom transformed into Man-Bat and challenged Batman in the Batcave again, this time kidnapping a kid called Jason Todd.[30] In his twisted mind, Man-Bat tried to transform Jason into a bat creature like him to make him his son, but Batman stopped Man-Bat with help from his wife and daughter and reverted the transformation once more.[31]

Years later, Robert joined the team known as the Outsiders under Batman's leadership. However, when the team disbanded after an unfortunate accident, Robert offered his support to the only remaining member of the team, Batgirl.[32]

A few days later, Langstrom went to the Iceberg Lounge to join the efforts of other meta-humans to regain control of the city by banning Intergang from Gotham. Penguin was pleased with the help and soon, Batgirl arrived to ask for Man-Bat's help.[33]

After Batman's death, Man-Bat joined the Network, a group of heroes that fought against the increasing crime in Gotham.[34] During this time, Langstrom's wife, Francine, disappeared and Man-Bat went looking for her. In his search, he helped Lynx on a fight against street gangs and later, he arrived at the Gotham Power Plant, where he was attacked by Dr. Phosphorus, who had captured Francine to lure Langstrom into a trap. Langstrom managed to escape, but when Phosphorus attacked Francine, Langstrom transformed into Man-Bat without the need of the Serum and defeated Phosphorus. Realizing the consequences of transforming at will, Langstrom ran away from his wife and friends.[35]

Some time later, Man-Bat was summoned by Oracle to join the other heroes of Gotham against the Seven Men of Death and prevent them from killing Vicki Vale.[36]

Retrieved from "https://dc.fandom.com/wiki/Robert_Langstrom_(New_Earth)?oldid=2679740"
Community content is available under CC-BY-SA unless otherwise noted.