Part of me is sad to be leaving the Batcave for what might be the last time. But without Bruce it's not the Batcave. It's just a hole in the ground. A grave full of memories. Maybe a grave for Gotham too.

Robin takes the Redbird for a ride

Robin finds himself with his throat in the vice-like grip of the new Batman, Jean-Paul Valley. Robin fears for his life, wondering at the fact that his death could come at the hands of the man hand-picked to replace his mentor, Bruce Wayne. Desperately, he jabs one of his R-shaped shuriken into Jean-Paul's arm, and the shock causes his adversary to release him. Strangely, Jean-Paul seems to come out of a trance, claiming that he had been under control of The System, a prospect which doesn't encourage Robin with respect to the new Batman's reliability or sanity. Rather than stick around, Robin hops into the Redbird and escapes from the Batcave

Meanwhile, a gang called the Speedboyz attempts to boost cars from the Gotham Heights Country Club parking lot. When the security guards intervene, the gang members open fire with automatic weapons, and speed away in their stolen cars.

Robin ditches the Redbird in the old carriage house at Drake Manor, and then tries to get on with his normal life as Tim Drake. On the bus to school, Tim has to turn down his friend Ives on an invite to the movies, because he has plans to go to a mixer with Ariana in Gotham Heights. His relationship with Ariana is a positive force in his life that makes him forget about all of the horrors of the last month in his other life.

However, at the mixer, he and Ariana are accosted by the jock Karl Ranck, who invites them to a party at his house. When Ariana responds that they don't have a car, Karl makes fun of Tim for it, and Tim consequently blames Ariana. Before he can apologize, the dance is interrupted by the carjacking Speedboyz. Tim notices that Karl is trying to prevent his car from being stolen, and winds up with a gun in his face. Tim's quick thinking saves Karl's life, and his heroics make Ariana forget about his earlier rudeness. 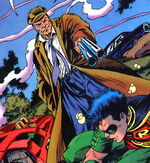 Elsewhere, Arthur Brown and some other criminals incarcerated at Blackgate Penitentiary attend a group therapy session where they eventually overpower their psychologist and give him some special instructions.

Robin speeds off in the Redbird in search of the Speedboyz, hoping to put a stop to their thefts. But when he realizes that someone is tailgating him, he tries to shake off his pursuer, and winds up crashed into some trees. He soon finds himself at the wrong end of Sheriff Smith's shotgun, suspected of being a Speedboy himself.

Retrieved from "https://dc.fandom.com/wiki/Robin_Vol_2_1?oldid=2652013"
Community content is available under CC-BY-SA unless otherwise noted.