"War Games: Act 3, Part 4 of 8: Too Many Ghosts": Robin finds the Ravens and engages in combat against them. Vicious and Pistolera make fun of him, as he keeps talking to [[Barbara Gordon (Ne

All the martial arts ninja training in the world doesn't matter a tinker's damn. The only thing that counts is whether or not you have the will to do what needs to be done. That's why I win, even though you beat me.

Robin finds the Ravens and engages in combat against them. Vicious and Pistolera make fun of him, as he keeps talking to Oracle through the intercom. Robin kicks Vicious in the face, breaking her nose and then he takes down Pistolera, disarming her in the process. Robin tells Oracle to call some police officers to his location to take the couple away and as the police arrive, Robin leaves, asking Oracle if there's any other place where he can go. Oracle tells him about Trickster and Mister Fun causing troubles elsewehere and Robin gets going on his motorcycle.

At that moment, Black Mask starts looking for Spoiler, following the trail of blood left by her and he finds her mask, lying on the ground. Spoiler attacks Black Mask by surprise and they start fighting again.

Meanwhile, Oracle contacts Batman and asks him his location. Batman tells her that he is going back to Orpheus' office to start investigating the trail of Spoiler, who has disappeared. Batman asks Oracle about Robin and she tells him that Tim is doing extremely fine and maybe he is over-compensating after losing his friend at the school shooting, but Batman tells her that Tim is fine and he dispatches Oracle in a rude manner.

Oracle contacts Robin and asks him what his current situation is and he replies that he is on a hot chase after Trickster, who leaves the car he is driving and starts walking in the air with his anti-gravity boots. Robin uses the Batrope to drag Trickster down and after telling him about how dumb he is, Robin leaves Trickster hanging from the bridge. 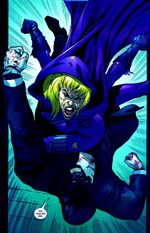 In the meantime, Spoiler is giving Black Mask the beating of his life. Black Mask is surprised to see the change in her attitude reflecting upon her fighting skills. Stephanie tells him that because of his endless torture, she finally understands that this is not a game and she keeps beating Black Mask to a pulp.

Robin is on his way to stop Mr. Fun and Oracle tells him to take a break and stop overworking himself. Tim replies that he doesn't need a break and he is rude to her, just like his mentor. Robin gets to the Cathedral and easily defeats Mr. Fun, after which she realizes that he must apologize to Oracle, as she was only concerned about him and his safety.

Stephanie finally gets the upper hand in the fight and sends Black Mask flying against a desk that breaks in half. Black Mask reaches for the drawer and picks up a gun, but Stephanie takes the weapon from his hand and gets on top of him with the gun pointing at his head. Black Mask urges Stephanie to pull the trigger, but she hesitates long enough to give Black Mask time to rest and get his second wind. Stephanie can't shoot him because of all that Batman taught her and in the end Black Mask tells her that's why she will never win against him. Black Mask shoots Stephanie in the shoulder, telling her that she should have done that to him. Black Mask takes Stephanie near a staircase and kicks her down, leaving her completely unconscious. Black Mask reveals that he plans to torture her a bit more to learn all she knows about Batman, but now all he wants is to get Spoiler out of his sight. Black Mask reaches Spoiler and tells her to give Batman his thanks, for sending a weak, poorly trained child against him.

Robin goes to Leslie's clinic and meets with his father on the rooftop of the building. Jack Drake is worried about his son, but Tim tells him that he decided to take a little break under one of Batman's liutenants suggestion. They share a moment in silence, knowing that they are all in danger during this times and after a while, Jack is called back inside the building. Robin also has to go and they leave, knowing that they care for each other.

Retrieved from "https://dc.fandom.com/wiki/Robin_Vol_2_131?oldid=2696471"
Community content is available under CC-BY-SA unless otherwise noted.