"Batman R.I.P. - Scattered Pieces": Robin suspects that there's something very wrong happening to Batman and following his instinct, he retrieved the Black Casebook from the Batcave. After reading and scanning some of the entries of the book, he is convinced tha

While Robin awaits for Spoiler to meet him on a rooftop of the city, he recalls the events from the Thögal Ritual from a year ago.

Bruce had just confronted the cult of the Ten-Eyed tribes on his quest to retrace his past. After this, he decided to perform the Thögal Ritual which consists of trapping oneself inside a cave for 49 days, in which the person dies and reborns before coming out. Tim and Dick witnessed how Bruce entered the cave and they decided to act instead of wait for him to come out. Together, theyr traveled to several countries of Europe, taking down criminals and infiltrating secret organizations to disable them from the inside. All this, while waiting for the Ritual to end.

When Spoiler arrived, Robin told him that he suspects that Batman has lost his mind and she can't help but laugh at the idea. However, Tim shows her the Black Casebook and tells her that one of the entries explains that Bruce Wayne was part of a mental experiment years ago. The purpose of this experiment was to allow a sane person understand how the mind of a deranged being works and Tim deduces that something happened to Bruce back then and it is affecting him now after the appearance of the new criminal group called the Black Glove. Spoiler is shocked about the information, but all she can do is ask Robin what is he planning to do next.

Robin leads Spoiler to the GCPD Headquarters, where he infiltrates the building into the women's bathroom and waits until Officer Jamie Harper shows up. Robin talks to her and asks her to infiltrate into Commissioner Gordon's private files and search anything concerning Batman and Harper agrees after realizing Robin's trust in her. 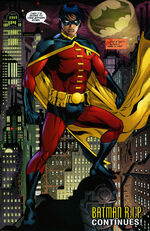 Robin is ready for war

Spoiler doesn't approve of Tim's actions, but instead of talking about it, Robin goes to the Sprang Bridge and stops the robbery attemp from the Sprang Bridge Soldiers. Spoiler helps him and after saving an elder couple, they walk upwards the bridge, where Robin tells Spoiler one last thing he did.

Before meeting with Spoiler, Robin went to the Iceberg Lounge, and using a lesson learned with Dick while in Europe, he offers Penguin a large amount of money in exchange for any information about Batman's location. Spoiler thinks that Robin is overreacting to the situation, but he tells her that he has thought everything and his conclusion makes sense considering all the evidence. Spoiler asks Robin what would he do if his theory turns out to be true and he tells her that he is ready to stop Batman.

Retrieved from "https://dc.fandom.com/wiki/Robin_Vol_2_175?oldid=2553124"
Community content is available under CC-BY-SA unless otherwise noted.