"Turning Point": Jack Drake is bound to return home and Tim is delighted. As he and Bruce wait for Jack at the airport, they discuss their future plans and Tim is less pleased to learn that Bruce is considering

Part of the "Batman: Knightquest" event.

I'm taking back the mantle of the bat before you spill any more blood on it. You don't deserve it. You never did.

Jack Drake is bound to return home and Tim is delighted. As he and Bruce wait for Jack at the airport, they discuss their future plans and Tim is less pleased to learn that Bruce is considering not coming out of his retirement from his role as Batman. However, every shadow of doubt is gone once Jack is safely home. Bruce takes the Drakes on a ride back to Drake Manor, where Tim learns that his father is determined to spend more time with him, which could only complicate his secret life as Robin. 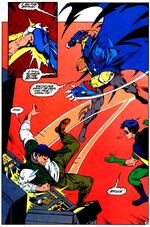 After this, Tim has the harsh duty to reveal the current state of affairs with Jean-Paul and his role as Batman. For this purpose, Tim goes with Bruce to Wayne Manor, where Bruce is shocked to learn the truth. His ancestral home has been abandoned by the man he chose as his replacement and Tim breaks the news about Abattoir's death at the hands of Jean-Paul. Furious and disturbed with the madman's actions, Bruce goes into Wayne Manor and breaks the brick wall that was placed to seal the secret entrance to the Batcave. Bruce and Robin go downstairs to confront Jean-Paul, who returns to the place after his alarms had been activated. Bruce is disgusted looking at Jean-Paul and tries to take the mantle of the bat away from the madman. Jean-Paul however is convinced that he is the rightful and only Batman and he manages to overthrow Bruce without much effort. Jean-Paul leaves in the Batmobile, giving Bruce a final warning to never return. Robin becomes infuriated and soon takes the Redbird to follow Jean-Paul across the highway.

The Redbird is no match for the Batmobile and soon, Robin has to admit defeat and gives up the chase. Upon returning to the secret barn, Robin talks with Bruce, who has come to terms with the fact that he needs to become Batman to save Gotham from the deranged Jean-Paul. However, Bruce is aware that his physical condition is nowhere near to that of his former self and he decides to train with the most prolific and dangerous combat master he knows. With this resolution, Robin finds peace knowing that the rightful Batman will claim his place in Gotham.

Retrieved from "https://dc.fandom.com/wiki/Robin_Vol_2_7?oldid=2787534"
Community content is available under CC-BY-SA unless otherwise noted.