The Rocket Red Brigade is a Russian military unit tasked with protecting the country against metahuman and other threats, often fighting alongside other Russian teams like Soyuz and the Red Shadows. The Rocket Reds wore armor designed by the Green Lantern Kilowog, who found communism much like the politics on his lost home planet Bolovax Vik. Today, the Rocket Reds are generally considered relics from the Cold War. Germany has its own unit based on the Rocket Reds, Die Rakete-Auslese.

Two agents of the Brigade became members of the Justice League International. Dmitri Pushkin served for many years as a leaguer and a reserve, until his sacrifice during the OMAC threat. In recent years, Gavril Ivanovich has taken up the name clandestinely, declaring himself Pushkin's successor. Despite being a renegade at his introduction, in the DCnU made him an accepted member by the Russian government. 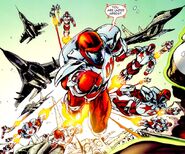 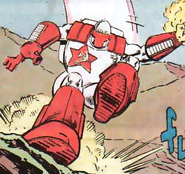 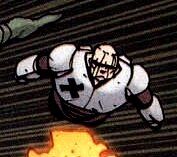 Dmitri Pushkin
TV Series
The Brave and the Bold