The Rogues are a team made up of enemies to the Flash. They individually struggle against the Flash, but are able to defeat him by working together. Despite their status as super-villains, they operate with a strict code of honor enforced by their leader Captain Cold. The original group included Abra Kadabra, Captain Boomerang, Captain Cold, Golden Glider, Heat Wave, Mirror Master, Pied Piper, The Top, Trickster, and Weather Wizard. There have been several line-ups since then under a variety of leaders. The Rogues were created by John Broome and Carmine Infantino, first appearing in The Flash #130. (1962) 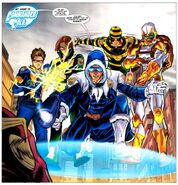 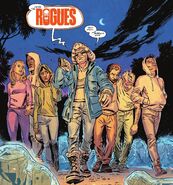 Rogues
Possible Futures
Out of Time

Rogues
TV Series
The Brave and the Bold