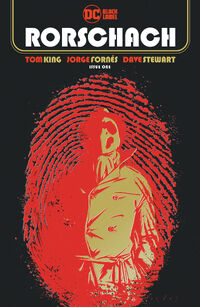 Rorschach (Volume 1) is a limited series, published by DC Black Label. It began publication in 2020 and stars the second Rorschach. The series is set thirty-five years after the original vigilante's death at the hands of Doctor Manhattan. Unlike the other Watchmen comics, it isn't set within the main Watchmen universe, opting instead to share continuity with the HBO adaptation.[1]

Retrieved from "https://dc.fandom.com/wiki/Rorschach_Vol_1?oldid=2859233"
Community content is available under CC-BY-SA unless otherwise noted.