Sure, I'd like to think I turned out okay...That I am the best me I can be. But if I can keep them from messing up as bad as I did? Why the hell not?

Roy Harper was Arsenal, formerly operating as Green Arrow's sidekick Speedy. He was a member of the Titans and a former member of the Outlaws.

Roy Harper was adopted by Big Bow as a child and lived with him on Spokane Indian Reservation, learning how to shoot a bow and arrow from him. He often got into trouble with the police but, because it usually happened on the reservation, Big Bow was always able to get him out of trouble. One day, Roy stole from a liquor store off the reservation and got blackout drunk, waking up to find a bow in his hand and Big Bow dead. Not knowing his mentor had been killed by an aggressive police officer, Roy fled the reservation.[3] 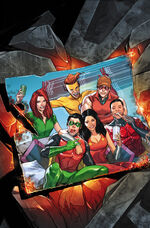 Roy as Speedy among the first Teen Titans

Roy somehow made it to Seattle, where he lived in a mall by hacking the camera feeds. It was at this mall he picked the pocket of Oliver Queen, who, when he came to get the wallet back, was intrigued by the strange boy, later taking him on as his sidekick and dubbing him "Speedy". While Speedy, Roy designed Green Arrow's elaborate trick arrows, much to the man's frustration.[4]

As Speedy, Roy joined the original Teen Titans (Robin, Wonder Girl, Aqualad, Kid Flash, and Omen) and worked with them for a while before having his memories of the team erased following an encounter with Mr. Twister.

Outraged by Roy's persistent party-boy behavior, Oliver angrily fired Roy as his sidekick. Roy left and took residence in an abandoned apartment building and, in his despair, became addicted to heroin.[6] Oliver returned briefly in an attempt to reconcile, but was so disgusted with what his former charge had become, left again. After being dragged into an evil plot orchestrated by Count Vertigo, Roy was officially reunited with Oliver, who apologized for firing him. Oliver offered to give their partnership another shot and help Roy get clean, but Roy adamantly refused, vowing to strike out on his own.[3]

Roy became a depressed alcoholic and death seeker following the death of the second Robin, who he briefly befriended beforehand. He attempted to commit a variation of suicide by fighting Killer Croc. Croc figured out what Roy was doing, stopped him, and gave him a pep talk, which Roy thanked him for.[7] Soon after, Roy began a recovery program with Killer Croc as his sponsor.[8] He would gain Lilith Clay as his counselor, not remembering their former bond as Titans.

Once his state improved, his desire to surpass Oliver Queen pushed him to leave for Qurac which was under the rule of a dictator. There, he formed a team called Iron Rule in hope to help the people overthrow the dictator. As a group of mercenaries, they only had one rule to follow: no matter the job, leave things better than the way they found them.

The team was successful and earned a lot of money. However, for some members, it wasn't enough. One day, as Roy was absent, the rest of the team attempted to take over the town they were residing in. Because the inhabitants resisted, they were slaughtered in retaliation. When Roy came back and found out there wasn't a single survivor, he avenged the towners by launching a lethal blast against his former team.[9][10] 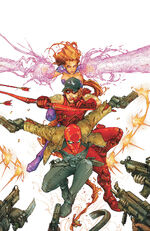 Roy and the Outlaws

At some point, Roy took the alias Arsenal to once again distinguish himself.

Having murdered his former team, Roy was caotured by the Quracan military and sentenced to death for war crimes.[11] [12] However, Roy was saved from execution by his former friend Jason Todd and the alien princess Starfire. The three of them would eventually form a team themselves - the Outlaws.[12]

A few weeks after their meeting, Roy and the Outlaws headed to China for some unfinished business. According to Todd, the All-caste, a mythical training league he fell into after his resurrection, was in trouble and he was intent on stopping it. The trio travelled the world, helping Jason find and destroy any of the power hungry Untitled.[8] 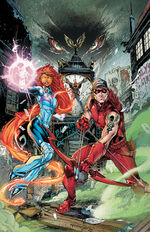 Near the end of their mission, the Outlaws stopped in Gotham City to aid the Bat family during the Night of the Owls. The Outlaws attempted to protect Mr. Freeze from his would-be Talon assassin but caught the ire of the supervillain himself. However, they were successful: Mr. Freeze was saved, the Talon was stopped, and the Night of the Owls concluded with minimal casualties. [13]

Though they tried to return to their mission against the Untitled, the Outlaws continued to help in Gotham when the Joker resurfaced, wearing his own severed face as a mask. Jason was abducted by the clown, having allegedly learned all their secret identities, and Arsenal and Starfire sprung into action to find him. Their objective caused them to cross paths with the Teen Titans, who were also looking for their Bat-affiliate Tim Drake.

Arsenal took an unprecedented leadership role with the teenagers as they tried to handle an outbreak of Joker Venom among Gotham's civilians. The Outlaws and Teen Titans were successful, administering the toxin's cure before the Gothamites perished. Jason and Tim would eventually return to their teams, bruised but alive, after Batman defeated the Joker yet again.[14]

League of Assassins vs. The Untitled

Troubled by the past few months, Jason had all his memories erased by the magician S'aru. Roy, disapproving, brought Jason back to their headquarters to try to rejog his memory but, upon finding out that he was murderer, amnesiac Jason fled, leaving the Outlaws temporarily leaderless.[15]

Isolated from his friends, Jason was abducted by the League of Assassins to lead them in their fight against the Untitled due to Jason's skill at defeating them in the past. To rescue their friend, Arsenal and Starfire actually joined forces with the Untitled to lay siege on the League, instigating the war between the two factions.

Talking to his former friends in their prison cells, the Outlaws apologized to one another for the mess they had gotten into, causing Jason's memories to finally return. Reunited once more, Red Hood and the Outlaws escaped from the League of Assassins and caused their headquarters to explode, finally ending the conflict. 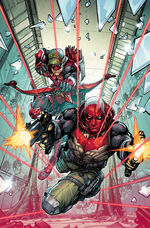 After the apparent death of Batman during the Joker's endgame, the Outlaws dissolved, with all three members going their separate ways.

However, after helping Arsenal during a solo operation though, Jason convinced Roy to work with him again. The duo set up shop in Roy's warehouse despite being broke. To raise funds, they turned to fixer Tara Battleworth for a job. Though she disliked their reputations, she gave them a job as mercenaries. Though they were successful with their mission, they were fired because Roy set up his own Hero-for-Hire side business for the two to make money that competed with Battleworth's.

Taking another contract, the two discovered the existence of Underbelly, the physical embodiment of all the world's corruption. When Underbelly tried to recruit Jason to his cause, the duo responded by vowing to destroy him. Anticipating where Underbelly would go to hide, the two headed to the most crime-ridden city on the planet: Gotham. While there, the Heroes-for-Hire were caught in the sights of the new Batman and convinced him to help them take down Underbelly. Their mission was ultimately a success.

Return of the Titans

The Return of Roy Harper

Roy and the Titans encountered Wally in Nightwing's Gotham apartment, but did not remember him thanks to the machinations of Abra Kadabra. After punching the speedster, electricity coming off of Wally managed to restore Roy's memory of his old teammate.

Roy's struggle with addictive vices continued to plague him. After the Titans separated, Roy flew back to Star City and assisted friend and mentor Green Arrow in his local heroism, helping him save a group of citizens from an exploding building. He was scheduled to have lunch with Oliver and Dinah, though it didn't go as planned. They arrived late to the lunch and just as Roy was about to confide in them about his problems, the conversation was interrupted by the new villain Citizen, and Roy was never able to ask for help.

Soon after, Roy instead sought help at Sanctuary, a rehabilitation center for heroes. However, there was an incident at the center, and Roy was accidentally killed by Wally West,[16] along with all the other heroes inside the facility at the time due to an uncontained Speed Force explosion.

Roy's funeral was held on the hilltop where he decided to get sober, attended by his close friends.

Batman resurrected Roy Harper. In an undead state, he joined the rest of the Teen Titans in their fight against The Batman Who Laughs' new multiverse.[17]

Retrieved from "https://dc.fandom.com/wiki/Roy_Harper_(Prime_Earth)?oldid=2860813"
Community content is available under CC-BY-SA unless otherwise noted.