The Royal Flush Gang is a rotating group of criminals that base their codenames after playing cards.

They have found themselves enemies of both the Justice League and the Rogues.

The Royal Flush Gang was originally established as enemies of the Justice League early in their career. The team was comprised of an Ace Android, King of Spades, Queen of Spades, and Jack of Spades. This team was foiled by the League and the new hero - Technician.[1]

A new team of criminals, calling themselves "the Royal Flush Gang" took the mantle when the Crime Syndicate came to Earth and claimed to have killed the Justice League. Some members attended the Crime Syndicate's announcement in Happy Harbor.[2]

Members of the second wave of the gang included Ace of Diamonds, Ace of Hearts, a new King of Spades, Jack of Diamonds, Jack of Hearts, Jack of Clubs, and an army of numbered soldiers, one being an Eight of Hearts. The Royal Flush Gang was under the leadership of a new Ace of Spades.

Setting up in the "Man of Steal" casino in Atlantic City, New Jersey, the Royal Flush Gang caught wind of a bounty set on the Rogues' heads set by the Crime Syndicate themselves. Hoping to acquire more territory and power in exchange for the Rogues, the Ace of Spades sent the Diamonds division to track down and apprehend the Rogues in Gotham City.[3]

However, the Ace of Spades wouldn't give up the fight and shot Weather Wizard in the head with his shotgun anyway, seemingly killing him, and causing Johnny Quick to go into a fury, being robbed of his rightfully deserved kill. In a fit of revenge, Johnny Quick went around killing members of the gang until he was beamed back to the Watchtower to deal with an important issue. The second group of the Royal Flush Gang was rendered defunct.[4] 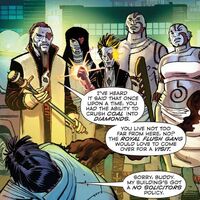 A third wave of criminals who became the Royal Flush Gang were active when Superman's identity was revealed publicly to be Clark Kent. The group was comprised of Ten, Jack, Queen, King, and Ace. This group didn't have a set card suit for each member, instead they wore a general collection of clubs, spades, hearts, and diamonds and referred to each other by their codenames.

The new Royal Flush Gang sought to bring grief to Kent by attacking his apartment building but happened to see him walking the streets on their way. Picking a fight, Ten only threw one punch before Ace surrendered and started beating up King. [5]

This group would resurface some time later after the death and replacement of Superman. The group was stopped by the new Superman in Metropolis while they were robbing a bank. [6]

The fourth team to call themselves the Royal Flush Gang was active when Batman and Two-Face were on the hunt for a cure, all while having a bounty on their heads. This Royal Flush Gang attempted to get in on the action but missed their opportunity after the two men escaped the Beast.

Looking to pick up where the assassin had left off, the Royal Flush Gang asked the Beast for directions. However, all they received was a bomb on their hover board that seemingly killed them all.[7]

However, the team survived and would ally themselves with Roulette. [8]

Retrieved from "https://dc.fandom.com/wiki/Royal_Flush_Gang_(Prime_Earth)?oldid=2694241"
Community content is available under CC-BY-SA unless otherwise noted.