I've been waiting for you to come along for quite a while. And waiting makes me... hungry.

Rudy Jones, alias Parasite, has the power to drain powers and life energy from others. He is a leech who has faced Superman many times.

Rudy Jones was a janitor at the Pittsburgh branch of S.T.A.R. Labs, who was transformed by an accident. Unknown to anyone at the scene, Darkseid, the lord of Apokolips, remembered the Parasite who had existed prior to the Crisis on Infinite Earths (Maxwell Jensen) and manipulated events in order to turn Jones into a new version. Under Darkseid's influence, Jones opened a waste container believing it contained something of value he could steal, and was exposed to a strange form of radiation which changed him into the bald, green-skinned Parasite. Jones now had the ability to absorb the life energy of others, leaving behind a smoldering skeleton. This power was necessary for his survival, as his own body is in a constant state of hunger for energy that it can't sustain on its own.

After a crisis in the timeline, Superman's origin - which now coincided with the Parasite's own - was rewritten. 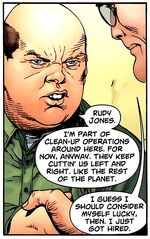 Rudy before the accident

Around Superman's first appearance in Metropolis, Rudy Jones worked as a janitor at the Daily Planet and met Clark Kent when he was first hired. [1]

Rudy's life would change though, when he won the 'LexCorp Lottery' - a daily prize Lex Luthor would bestow every morning on someone outside his building that guaranteed a life changing tour of his headquarters. Rudy, a short-sighted man, tried to exchange his winning experience for a cash prize instead.

Unfortunately, while on the tour, Rudy ducked out to eat a box of donuts that had been accidentally placed nearby some hazardous waste. Upon ingesting the goop, Jones was transformed into a purple skinned mutant with an insatiable hunger for the life energy of others.

With his new powers, Rudy immediately went after Lex Luthor and Lois Lane, who had an interview scheduled at LexCorp that day, but was captured by the new hero Superman. [2]

During this time, Martin Stein, one half of the Firestorm matrix (Ronnie Raymond being the other half) learned he was slowly dying, and decided to destroy all the nuclear weapons in the world. This did not sit well with Earth's governments, particularly the United States, who sent the Suicide Squad to Times Square, where Firestorm was holding a press conference.

Things quickly got out of control as the Squad and the Justice League, both intent on subduing Firestorm, fought one another, and the Parasite (who was brought on the mission despite the protests of both Amanda Waller and Colonel Rick Flag Jr.) is released. He goes on a rampage and apparently kills Multiplex, and was brought under control by both teams. Later, he attacked the new Firestorm, who easily subdued him and left him near death.

During a period of incarceration at Belle Reve Prison, doctors attempted to cure the Parasite of his condition, but succeeded only in changing his skin color from green to purple and increasing his absorption power, enabling him to feed on other forms of energy such as electricity and heat.

After a number of years, the Parasite became involved in the plot to save Superman from overloading on solar energy. Rudy and Superman battled on the moon, where Superman uncontrollably unleashed an immense blast of heat vision that the Parasite absorbed, causing him to mutate even further into a huge, hulking monster with teeth resembling a leech's. This mutation (Parasite 2.0) again increased Rudy's draining abilities, allowing him to absorb fast-moving objects' inertia; it also made him impervious to telepathic attacks to an unknown extent, since he could now drain energy through a mental link (as he displayed when Dubbilex telepathically attacked him). His extra size and power did have a downside, however; he needed to absorb more energy more frequently in order to stay alive.

Unfortunately for a scientist that was tending Rudy during one of his terms in imprisonment, he was tricked and somehow absorbed into the Parasite. This joining was different from Rudy's others; he actually retained the scientist, Dr. Torval Freeman, as a part of his own mind. This combined intelligence made the Parasite even more menacing.[3]

Because the Parasite can absorb Superman's energy, he is a formidable foe. The Parasite was recruited by Morgan Edge to be part of the second Superman Revenge Squad. Failure followed every one of his encounters with the Man of Steel. After Superman's powers were converted into electricity-based ones, the Parasite returned to see what he could absorb from the Man of Steel. However, at this point in time, Superman was not in full control of what was happening with his powers and nearly killed the Parasite.[4] Later, Parasite returned once again, looking to make trouble for Superman but finding himself facing off against Supergirl instead.

At one point, Rudy was contracted to help drain off a being named Strange Visitor's excess electromagnetic energy, as she could not fully control it. This exposure to Strange Visitor's power caused the Parasite to mutate again, giving him the ability to fully and permanently retain the intellects of all of his victims, and also allowed him to maintain any stolen energy for up to twenty-four hours.[5] Like Torval Freeman, Rudy also absorbed an unknown shape-shifter into his biology, granting him the permanent power to mimic the exact genetic makeup and appearance of his victims (Parasite 2.5).

After he later escaped from S.T.A.R. Labs in the early 2000's, the Parasite began to form a plan to get back at Superman. He began stalking Lois Lane and Jimmy Olsen in an attempt to get to those closest to Superman. The Parasite had taken the form of one of his previous victims, an old man, and was run down in the pandemonium that evening when Lois came to his aide. Not realizing that she was actually in contact with the Parasite, the simple touch was all Rudy needed to get the lowdown on Superman. Rudy was surprised to learn Superman's secret identity, and devised a new plan when he realized how close Superman actually was to Lois; the Parasite decided to take her place and tear him down emotionally by pretending to be a scorned Lois Lane.

Parasite's ruse would probably have worked if he had not had enough of Clark's constant apologies and attempts to get to the bottom of his and Lois' relationship problems. In a fit of rage uncharacteristic of Lois Lane, Rudy punched Clark out of their apartment and into the streets of Metropolis. Shortly after this display, Superman got the Parasite to reveal himself in the guise of Lois Lane. Rudy couldn't handle the fact that anyone other than himself (specifically as the Parasite) took down the Man of Steel. Just as the Parasite was about to lay the final blow to an exhausted Superman, Rudy drops, completely crippled by Kryptonite poisoning he had drained from Superman, unbeknownst to either Rudy or Clark. Superman finally realized that the reason he has felt so weakened recently was because he was being constantly drained by the Parasite, and was also the victim of the mysterious Kryptonite poisoning.

When he asked Rudy how long he had pretended to be Lois, the Parasite related his story to the Man of Steel. In his final moments, he tells Superman that he still needed to have contact with Lois once every twenty-four hours to maintain his charade, confirming that she is still alive. He also told him that Lois loves him more deeply than he could ever know. The Parasite died before he could tell Superman where Lois was imprisoned.[6] Fortunately, Lois was soon found alive by Superman and Batman inside a cave the Parasite had used as a hideout.[7]

Lex Luthor, with whom it is implied the Parasite had engaged in amorous, "extramarital" activity while in Lois' form, was infuriated when he learned of the Parasite's schemes. As such, Luthor went to great efforts to obtain the Parasite's remains.

Recently, the Parasite was holed up in St. Roch, Louisiana, where he uses his power-absorbing abilities to temporarily neutralize the powers of villains, for a fee, so they might evade detection during the course of criminal efforts.[8] It is not explained how Rudy survived his apparent death by Kryptonite poisoning several years earlier, although Jones has shown in the past to be capable of regenerating his entire body from being burnt down to the skeleton, so he may very well have simply healed from the Kryptonite radiation. How he escaped Lex Luthor's custody is another question entirely.

There is also the possibility that this Parasite may not even be Rudy/Torval at all; his face is lacking the monstrous teeth that the Parasite has had for most of his career; his vocabulary is more sophisticated than what is normally associated with Rudy Jones, although this may be a result of Torval Freeman possibly being the dominant personality currently; and his costume is the one worn by Raymond Maxwell Jensen, which the Post-Crisis Parasite has never worn before. The only consistent characteristic of the Parasite is his hulking physique.

Rudy and pre-Zero Hour Metropolis are taken by Brainiac and Telos and is trapped for a year. He tries to rob a store, but is stopped by Steel and his niece and nephew. After regaining his powers, he fights Gen 13. He is eventually defeated when they barbecue him and throw a dumpster on him.

Retrieved from "https://dc.fandom.com/wiki/Rudolph_Jones_(New_Earth)?oldid=2770614"
Community content is available under CC-BY-SA unless otherwise noted.