This story is reprinted from Batman #242.

The news about Bruce Wayne's accidental death reach Gotham City and the consequences of this are discussed by Batman and Commissioner Gordon. Gordon wants Batman to assist to Wayne's memorial ceremony, but Batman informs him that he is needed somewhere outside of Gotham and that he can't attend. Batman parts ways with Gordon, telling him that he might be out of town for a long time.

Once out of Gordon's reach, Batman thinks that faking Bruce Wayne's death was the best approach in order to take down an enemy who knows Bruce Wayne is Batman. With that in mind, Batman has decided that he will need assistance in order to bring down such a menacing threat and he starts recruiting members to form a team.

Batman's first choice is the relatively notorious gangster Matches Malone. Batman disturbs the man while he is taking a meal on his favourite restaurant and Malone sends his thug to stop Batman. When Batman easily defeats the henchman, Malone tries to escape through the kitchen, but he panics at the last second and he shoots at Batman. Unfortunately, the bullet misses the target and ricochets back to Malone, killing him instantly.

Batman's second recruit is Doctor Harris Blaine, a notorious scientist who has been working on secret projects for the government. Batman disguises himself as the late Matches Malone and follows Blaine to the Gotham Arms Hotel, where Blaine is suddenly attacked by a mysterious assailant. "Malone" intervenes, saving Blaine and taking him to a special screening room, where he is introduced to Batman. Both Malone and Batman explain that they need Blaine in order to stop the dangerous threat of a man who is mad for power: Ra's al Ghul. At that moment, the mysterious attacker finds them and he introduces himself as Lo Ling, one of Ra's men who was sent to capture Dr. Blaine and kill Batman. Having failed at his first assignment, Lo throws a dagger through Batman's chest and he escapes. Malone tells Blaine to find help and once he is alone, Batman takes off the disguise of Matches Malone and makes sure that the Batman dummy he used to fool the assassin accomplished its goal.

Batman then follows Lo Ling to the rooftop of the building, where the assassin attempts to escape. However, when Lo sees Batman alive, he loses his balance and falls down. Lo is saved by Batman and he is now forced to return the favor to the Dark Knight. Batman gives Lo the instructions to meet Dr. Blaine and Matches Malone the next week, when they'll start their plan against Ra's al Ghul.

Finally, when Batman finds himself alone, he realizes that all the odds are against him, but he doesn't give up as he believes he is fighting for the right cause.


Appearing in "The Lazarus Pit!"

Synopsis for "The Lazarus Pit!"

This story is reprinted from Batman #243.

Batman and Lo Ling have arranged a combat in which Ling would decide whether to continue working as a servant of Ra's al Ghul or if he is to work with Batman. With Matches Malone as their witness, they start the combat and they are evenly matched until Batman disarms Ling and gets the upper hand of the fight. 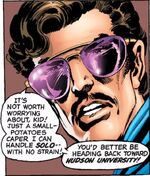 Batman is Matches Malone
Ling however manages to recover his dagger and tries to stab Batman with it, but the Dark Knight uses his strength to turn the dagger against Ling and cut some of the skin of his neck. As Batman to draws first blood, he is declared winner of the combat and Ling is compelled to obey and serve Batman, turning his back on his previous master. Batman instructs Ling to meet him later at a private airfield and when Ling leaves the place, Robin takes off the disguise of Matches Malone and bids Batman farewell as he returns to Hudson University.

Moments later, Batman wears the guise of Matches Malone and he joins Ling and Doctor Harris Blaine at the private airfield, where they jump into a plane that will take them to the last known location of Ra's al Ghul; Switzerland.

After their arrival, "Malone" decides to leave his partners in order to visit an old friend. Meanwhile, Blaine and Ling get outside of the airport and Ling spots Ra's al Ghul's daughter, Talia. Following his loyalty to Batman, Ling attempts to capture Talia, but he is stopped by the powerful Ubu. At that moment, Batman appears and challenges Ubu before defeating him. Batman then goes after Talia and he grabs her by the arm, but she has no intention of escaping. Unfortunately, Batman is attacked by a lady from behind, who believes that Talia is a damsel in distress and needs help against Batman. This moment is used by Ubu to attack Batman while he is down, but Talia prevents him from seriously hurting Batman, as she tells Ubu that they need to warn her father about Batman.

When Batman recovers, he meets the lady who attacked him. Molly Post is a well known athlete and she apologizes for the mistake she made. When Batman informs her about his mission to capture Ra's al Ghul, Molly decides to join their team, as one of her former lovers was once a victim of Ra's and his schemes. Using some snowmobiles, Batman and his team travel to Ra's al Ghul's secret lair in the snowy mountains. Ling guides them to the place until they reach a cable car, which connects them directly to Ra's place. Batman and his team ride the cable car and manage to take down the guards, but as soon as they reach the highest part of the mountain, they are attacked by some shooters from a bunker. Dr. Blaine's chemistry knowledge proves useful against their attackers, who are stunned after an explosion caused by Blaine, which allows them to reach the main entrance to Ra's secret fortress.

Upon finding the secret door, Batman decides that he is going to be the first to enter the place, all alone, to make sure there are no traps for them inside. After kicking the door open, Batman finds a hallway and at the end of it is Ubu, manipulating some kind of machine. Batman runs towards him and delivers a stunning flying kick, as payback for their last encounter. Soon, Talia enters the place and she is tackled by Molly, who believes she was about to harm Batman. However, Talia explains that she would never harm Batman and she proceeds to kiss him, making Batman even more confused about his feelings for her. After this, Batman asks Talia about her father and Talia informs them that Ra's is in the room with them. Taking a large cloth from the machine that Ubu was working on, Talia reveals Ra's al Ghul's corpse lying on a table. At first, Batman is unsure about the whole scenario, but when Dr. Blaine confirms Ra's death, Batman has no option but to leave the place with his team. Talia then suggests Batman that she should go along with them as well, but before she leaves, she secretly activates a button and then she joins Batman and the others on their way out.

As Batman and the others leave the secret sanctuary, the machine starts working and a large section of the floor opens, revealing a secret pool underneath. After the floor is cleared and the pool is absolutely visible, the table in which Ra's body is lying, starts a slow descent towards the green, murky waters of the pool below until it is completely submerged. After a couple of minutes, the table starts rising, as slowly as it had descended. Finally, when it has reached its initial position, the table stops and the body of Ra's al Ghul comes back to life. As Ra's slowly incorporates, it becomes clear that the process has affected his mind as a mirthless, insane smile is shaped on his face and the body that was dead a few minutes ago, starts walking the land of the living once again.


Appearing in "The Widow's Walk"

Synopsis for "The Widow's Walk"

This story is reprinted from House of Mystery #179.

When her unloving sailor husband abandons her for the sea, a wife curses him that he shall not put into port as long as she lives. He is lost at sea, and with her dying breath, she allows him to dock. The rotted hulk rises from the bottom, and the zombie captain sails into port at last.

Retrieved from "https://dc.fandom.com/wiki/Saga_of_Ra%27s_al_Ghul_Vol_1_3?oldid=2745386"
Community content is available under CC-BY-SA unless otherwise noted.