"The Demon Lives Again!": This story is reprinted from Batman #244.

A Vow from the Grave!


Appearing in "The Demon Lives Again!"

Synopsis for "The Demon Lives Again!"

This story is reprinted from Batman #244.

Batman and his small team have captured Talia after witnessing the death of her father Ra's al Ghul in their secret hideout. However, as they approach the cable car that would take them down from the snowy mountains, they are utterly shocked to see Ra's al Ghul coming after them. Ra's had been revived by the powers of the Lazarus Pit and Talia explains that after the process, his strength is extremely increased while his mind is struck by a fit of madness. True to her words, Ra's seems to be unable to control his actions and Lo Ling tries to stop him, but fails miserably. Knowing that Ra's could harm the others, Batman confronts the crazed man, but despite his best efforts, he is easily defeated by Ra's. With Batman knocked unconscious, Talia talks to her father, bringing some reason to his mind and she takes him to a secret hovercraft they had concealed in case of emergencies. When Batman recovers, he is informed about Talia and Ra's escape before he starts following their trail with Molly Post by his side. Using Molly's skiis, they follow the hovercraft and Molly reaches the vehicle first. She throws one of her poles to the engine of the vehicle and manages to bring it down, but the pole ricochets towards her and injuries her shoulder. Batman watches as Talia and Ra's make their escape by foot, but he can't give chase to them as he has to take Molly to a medical center.

After Molly and Ling are taken to medical centers for their injuries, Batman finds himself alone since Harris Blaine has decided to stay with the injured and Batman has to continue his quest to bring down Ra's alone. Batman starts by investigating the wreckage of Ra's hovercraft, where he finds a camel's bridle and he knows where to locate his dreaded enemy.

Far away from Switzerland, Ra's al Ghul and his daughter have gathered enough people and supplies on their desert hideout in order to rebuild many of the damages caused by Batman. While his men work endlessly, Ra's explains to Talia that he might no longer be able to use the Lazarus Pit to renew is life, since he has used it many times over the years and soon it will no longer work on his body. For this reason, he finds himself in need of hasten his plan to cleanse the world. At that moment, Batman breaks into Ra's tent, where he attempts to capture Ra's and bring him to justice. Ra's al Ghul is not intimidated by Batman's sudden appearance and he tells Batman that he is not going anywhere without a fight. Ra's then shows his respect and admiration for Batman by informing the "Detective" that he won't have him shot by his men if he is able to defeat him on a duel to death. 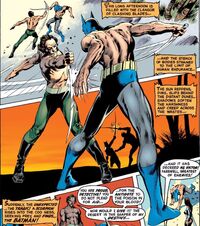 Duel to the Death

The final duel of the fates is to take place right then and there, and both adversaries prepare for their last stand. Ra's commands Talia to bring him his finest weapons and she delivers a couple of magnificent swords, one for each fighter. Ra's and Batman take away their upper garbs for the combat and then the battle starts, much to Talia's sorrow. Batman and Ra's are both skilled swordsmen and their fight is a sight to behold. For hours, they exchange attacks and counter-attacks, worthy of only the greatest duelists.

The fight continues for hours until twilight with no clear winner, until fate ends the fatal combat. While fighting on the hot sands of the desert, Batman's foot reaches a small, but deadly scorpion, which stings Batman's foot, making the Dark Knight unable to continue the duel. Ra's declares himself the victor and he decides to leave Batman to his eventual death by denying him the antidote for the scorpion's poison. As Ra's walks away from his defeated enemy, Talia approaches Batman and claims that she wants to give him one last kiss. However, Talia is really giving Batman the antidote to fight the scorpion's venom and a few hours later, Batman recovers from the deadly attack.

Batman starts walking alone in the desert night and follows the trail of Ra's al Ghul, back to his base of operations. When Batman appears once again in Ra's tent, Ra's al Ghul is utterly shocked to see Batman alive, deeming him as a supernatural being. With unprecedented rage, Batman knocks down Ra's al Ghul, who doesn't even try to evade Batman's attack. With Ra's unconscious, Batman wonders why the most dangerous of enemies he has faced, didn't try to resist and Talia tells him that perhaps Ra's recognized him as his superior. Finally, knowing that Batman will take Ra's to the authorities, Talia asks her beloved if she is to be imprisoned as well, to which Batman simply replies by holding her in his arms and giving her a long passionate kissing before parting. Talia then watches as Batman strides away, carrying Ra's along with him.

This story is reprinted from Batman #245.

Batman however knows that the note is fake, since he didn't write any note of the sort, but the forgery is very well made. For this reason, Batman has to discover how such a forgery was made and he locates an elder man, with a machine that can recreate any handwritting. Batman tries to capture the man, but the old man is cunning and stops Batman with an electric shock. While Batman is struggling to free himself from the trap, the forger escapes and Batman is only able to escape when the whole place is burnt to the ground, including the machine and the evidence.

Finally, Batman decides to follow the old man to the politician's place, where he assumed the man would go. Batman's hunch proves right and he is able to capture the corrupt politician while the man tries to get rid of the elder forger. By the time Batman has disposed of the criminal and his goon, Commissioner Gordon and his force arrive at the place and close the mystery.

A few days later, the headlines of the Gotham newspapers are all talking about the miraculous survival of Bruce Wayne after the plane crash in the jungle of South America and his return to Gotham City.


Appearing in "A Vow from the Grave!"

Synopsis for "A Vow from the Grave!"

This story is reprinted from Detective Comics #410.

Batman in on the trail of an escaped killer on the outskirts of Gotham and he manages to corner the criminal in a rocky area, but he is attacked by a big man, who allows the killer to escape. Batman is forced to confront the big man and he manages to knock the juggernaut unconscious. At that moment, Batman meets three more people, all of which are physically different. Their leader explains that they used to be circus freaks and that they retired to live in seclusion. They also inform Batman that the big man, whose name is Goliath, didn't intend to attack him, but despite their explanations, the killer is on the loose and Batman continues his seach.

Moments later, Batman stumbles upon an abandoned town hall, which is being used as the freaks' home. When the fat lady screams in despair, Batman investigates and learns that the thin man had been hanged a few moments prior. After this, Batman notices that the escaped killer is just outside the place and he captures the criminal, taking him inside. Unfortunately, Batman has deduced that the killer didn't murder the thin man, but that the crime was committed by the Goliath, seeking to eliminate his competitor for the fat lady's affections.

Batman follows Goliath to the belltower, where he threatens to drop the seal-boy unless Batman jumps down first. Batman complies, tricking Goliath, who in turn tosses "Flippy" and he is rescued by Batman, who was still hanging with help from his Batrope. Afterwards, Batman confronts Goliath and the killer, both of whom started to work together against a common enemy, and Batman gets help from the fat lady and Flippy. Like this, Batman manages to capture two killers and as dawn breaks, he takes them back to meet their justice.

Retrieved from "https://dc.fandom.com/wiki/Saga_of_Ra%27s_al_Ghul_Vol_1_4?oldid=2745387"
Community content is available under CC-BY-SA unless otherwise noted.