We're both ghosts. We died on that island.

Sara Lance is the daughter of Quentin Lance and Dinah Lance; she is also the younger of Laurel Lance. A former member of the League of Assassins known as Ta-er al-Sahfer, but eventually she left and became a vigilante hero in Starling City operating as The Canary. Later, after her resurrection, she was recruited by Rip Hunter joining the Legends as The White Canary. Sara eventually replaced Rip as Captain of the Waverider and as Leader of the Legends.

Growing up, Sara often felt like the black sheep and rebel of her family compared to her more accomplished parents and her sister being the “golden child”. She often got into trouble, partying with boys, getting into fights with girls, and even shoplifted; a charge her father made go away.

Sara and Oliver on Queen's Gambit.

In 2007, Sara began secretly seeing her sister’s boyfriend, Oliver Queen, when Oliver then invited her to join him on a sailing trip with his father, Robert Queen, on his yacht, The Queen’s Gambit. Her mother later discovered the affair and reluctantly allowed Sara to go with Oliver. While onboard the ship together, the yacht was sabotaged causing it to sink and Sara was pulled by the tide with Oliver watching her apparently drowned. Unbeknownst to Oliver, Sara survived and drifted in the ocean for days before being rescued by Anthony Ivo.

However, Sara’s salvation came at a price as Ivo began was capturing and experimenting on various subjects and Sara was forced to assist Ivo with his experiments. As Ivo’s ship eventually made itself to Lian Yu and discovered that Oliver is alive. On the island, Sara witnesses the beginning of Oliver’s blood feud with Slade Wilson due to Shado’s death through Ivo’s manipulations. When the Amazo goes down, Sara survives the wreckage but is presumed dead again. Eventually, Sara was found by Nyssa al Ghul and is brought to the Nanda Parbat. She is eventually trained and becomes a member of the League of Assassins known as “Ta-er al-Sahfer” (The Canary or Yellow Bird). During this time, Sara and Nyssa fall in love and become lovers. 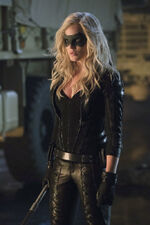 Sara Lance as The Canary.

As Sara’s time as a killer in the League begins to haunt her, she later learns that an earthquake occurred in Starling City’s district, The Glades. Worried for her family’s safety and wanting to leave her life as an assassin, Sara deserts the League and returns home. Sara watches Laurel and her father in secret, while also moonlighting as a masked vigilante known as the Canary; protecting women from misogynistic criminals. Sara also eventually teams up with Oliver, now known as the Arrow, and his team. She also reveals to her father that she is alive, and Quentin is overjoyed with tears to see her again. Working to protect her family from the Dollmaker, Al-Owal, and the League before leaving to ensure her family’s safety.

After Laurel was poisoned with snake venom by the League of Assassins, Sara is forced to return home where she is confronted by Nyssa once again. Although, Nyssa has been ordered by her father, Ra's al Ghul, to kill her former lover for her desertion; Nyssa’s true goal to get Sara to return to her and bring her back to the League. Nyssa eventually kidnaps Sara’s mother while Laurel was recovering in the hospital and gives Sara 24 hours to come back to the League or Dinah will die. Instead, Sara poisons herself with the same venom that was used on Laurel. In the ensuing battle, Nyssa is defeated by Oliver, but a dying Sara begs Oliver to spare Nyssa. Still loving Sara and seeing that she would rather die than rejoin the League, Nyssa tearfully releases Sara from her vow from the League and leaves Starling City. Recovered from her poisoning thanks to Oliver, Sara reunites with her family and while her parents are happy to have her back, Laurel, still angry at Sara for all the pain she caused to her, and her parents, rejects her. Eventually, however, Laurel comes to forgive Sara, and the two reconcile.

Joining Oliver’s team, Sara and Oliver revisit a brief relationship with Sara later deciding to end it due to believing that Oliver deserves better than her. Sara later returns to Nanda Parbat to recruit to the League aid Oliver against Slade Wilson’s Mirakuru army. After Slade’s defeat, Sara returns to the League as part of her exchange for the League’s assistance. Several months later, Sara is assigned to hunt down Malcolm Merlyn and returns to Starling City only to be killed by Thea Queen who was under the influence of a drug by Malcolm to force Oliver into a war with the League and Ra’s. Sara’s death inspires Laurel to channel her anger and grief to become a new vigilante, the Black Canary.

A year after Sara’s murder, Laurel discovers the existence of the Lazarus Pit and uses the Pit to resurrect Sara. However, Sara initially comes back as a soulless creature. Oliver later contacts an old ally, John Constantine, and Constantine restores Sara’s soul to her body. Despite having her soul back, Sara is now struggling with the bloodlust as a result of the Lazarus Pit causing her to leave to figure out how to regain control of herself.

While in Tibet, Rip Hunter offers Sara a spot on his team to stop |Vandal Savage from conquering the world in 2166. Initially reluctant, Sara is later convinced by Laurel to accept his offer and takes up the new identity, the White Canary. Boarding the time-traveling ship, the Waverider, Sara starts to find a way to manage her bloodlust, while also bonding with the rest of the Legends and even develops a mutual attraction with Leonard Snart. Returning home in 2016, Sara discovers that Laurel was murdered by Damien Darhk; leaving her devasted and desperate to save Laurel. After Savage is killed, Sara remains with the Legends in honor of Laurel and hopes to one day save her. 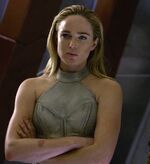 When Rip becomes missing in action after the Legends were scattered throughout time, Sara becomes the new team leader and the Waverider’s Captain. Still trying to save Laurel, Sara begins hunting down Darhk in order to kill him to prevent Laurel’s death, however, she is eventually persuaded not to by Martin Stein due to the ramifications he could have on the timeline. Sara and the Legends eventually return to support Oliver and Barry Allen in repelling the Dominator’s alien invasion and ends up meeting Supergirl from the parallel universe of Earth-38. The Legends later come up against the Legion of Doom who are attempting to use the Spear of Destiny to rewrite reality itself for their own benefit. Later using the Spear, herself, Sara is briefly reunited with Laurel as a manifestation of the Spear and encourages her to what is right and come to terms with her death; Sara ultimately renders the Spear itself inert and the Legion is defeated.

After the Legion’s defeat, anachronisms occur throughout time causing Rip to disband the team while his new bureaucratic organization, the Time Bureau, handles the anachronisms. Later, Sara reassembles the Legends and begins a loose partnership with the agency. Later on, Sara attends Barry Allen and Iris West’s wedding and ends up having a one-night stand with Alex Danvers. Working together with the assembled heroes, repel the invading army from the Nazi world of Earth-X. However, Stein is killed during the incursion, leaving Sara and the Legends in mourning. 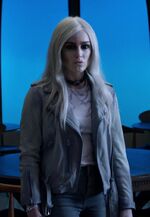 The Legends soon come into conflict with the demon, Mallus, when John Constantine recruits Sara’s help to exorcise the entity from a teenage Nora Darhk. Sara and Constantine later end up sleeping together in a mental hospital despite Sara’s ongoing romantic tension with the Time Bureau Agent Ava Sharpe. Eventually, Sara and Ava begin dating but when Mallus tricks Sara into wearing the Death Totem, allowing him to temporarily possess her; Sara breaks up with Ava feeling that she is too dangerous for her.

After Mallus’s defeat, Sara and Ava, realizing that they love each other resume their relationship. After Quentin is injured by Ricardo Diaz, Sara returns to Star City and meets her sister’s doppelganger, the Earth 2 Laurel Lance, Quentin later dies in surgery, leaving Sara and Earth 2 Laurel to mourn him together. Ava and Sara eventually start trying to live together in a shared apartment, but their plans are put on hold when magical creatures spread out across history. The Legends then fight off the demon, Neron, who is attempting his own takeover in Hell.

During the Crisis on Infinite Earths, Sara is recruited to save the multiverse and discovers that she is the Paragon of Destiny. After the Paragons and Oliver, now Spectre, defeat the Anti-Montior, the multiverse is reborn through their efforts but at the cost of Oliver’s life. Although saddened to lose Oliver, Sara later discovers that her father is alive in this new reality. After Oliver’s funeral, Sara sends Earth 2 Laurel to Star City in 2040 to aid Dinah Drake and Oliver’s daughter, Mia.

Later, Sara and the Legends come into conflict with the Three Fates. While fighting Atropos, Sara witnesses her godly form and becomes blind. As a result, however, Sara gains the power to see the future allowing her to continue to fight. In the final battle, Sara manages to kill Atropos. With the Atropos’s death, Sara loses her powers and regains her eyesight. Following the Fate’s defeat, Sara is later abducted from her team by unknown forces.

Retrieved from "https://dc.fandom.com/wiki/Sara_Lance_(Arrowverse)?oldid=2877780"
Community content is available under CC-BY-SA unless otherwise noted.