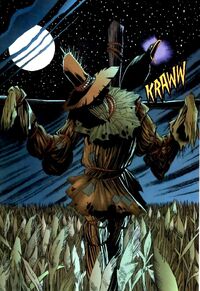 Scarecrow is one of Batman's earliest enemies and one of his most deadliest foes. Professor Jonathan Crane was a renowned psychiatrist, but his childhood was plagued by abuse and fear. After reaching adulthood, Crane decided to study every single aspect of fear until he became a master on the subject. However, his obession with fear caused him to lose his sanity and, adopting the name of Scarecrow, he tried to expand the limits of fear by exposing people to their greatest fears and for this purpose, he created his trademark Fear Toxin.

His mental estate and his brilliant mind make of Scarecrow the ultimate figure of fear, which has been haunting Gotham's nightmares for decades.

Retrieved from "https://dc.fandom.com/wiki/Scarecrow_Recommended_Reading?oldid=2195576"
Community content is available under CC-BY-SA unless otherwise noted.