The creation of Scarface has its roots in the dark, violent history of Gotham County's island correctional facility Blackgate Prison. Arnold Wesker was a quiet and passive man, who had apparently been sent to prison for "accidentally" stabbing a ma

Ya hear him? A glocka wood, he called me! Me!! One of da greatest criminal grains in da city! Are you gonna let him get away wit' dat?

Scarface is the Ventriloquist's dummy. It appears to be an inanimate wooden puppet, but the villains Arnold Wesker and Peyton Riley project one of their multiple personalities on the dummy.

The creation of Scarface has its roots in the dark, violent history of Gotham County's island correctional facility Blackgate Prison. Arnold Wesker was a quiet and passive man, who had apparently been sent to prison for "accidentally" stabbing a man to death in a bar fight. Wesker was impressed with a doll named Woody, which belonged to another inmate called Donnegan and wanted to try him out, but the owner was very protective of his puppet and warned Wesker to stay away.[1]

Wesker prepared to hang himself from the ceiling of his cell when suddenly Woody began talking to Wesker and convinced him to forego suicide in favor of escaping from prison. While the two spoke, Donnegan, Woody's owner, awakened and attacked Wesker, brutally beating him down onto the floor. He also stabbed at Woody with a corkscrew, creating a long scar across the right hand side of the puppet's face. Arnold fought back and smashed Donnegan along the side of the face with a loose brick. He strung his body up on the noose that he originally intended to use for himself, and Woody and he made their escape through a tunnel made years ago by Donnegan.

The tunnel led to the shoreline of the island near the prison boathouse. At Woody's urging, Wesker picked up a riot shotgun and killed two guards, before stealing a raft. They paddled to the mainland of Gotham City and acquired a fresh set of clothes. The puppet, unsatisfied with the named that Donnegan had given him, decided to provide himself with a new name; one more befitting an angry criminal mind with high ambitions – Scarface.[2] 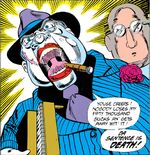 Arnold Wesker possessed Scarface from then until his death,[3] with a few notable exceptions. Under his guidance, Scarface became at some times one of the top mobsters in Gotham City.

On their first criminal activities in Gotham, Ventriloquist settled on a club aptly named, "Ventriloquist Club", from where he operated a large drug ring, selling the new designer drug known as Fever.[4] Once Wesker was stopped and captured by Batman, he was locked in prison along with Scarface, making unusual cellmates for each other.[5] However, this unwise decision allowed Wesker to keep using Scarface to keep running drug dealing business from inside prison.[6]

After Wesker was released from prison, he and Scarface sought to reform their lost empire; but the street gang known as the Street Demonz had taken over their criminal activities and they met Scarface with utter violence. The gang destroyed the Scarface puppet, reducing it to splinters. Wesker's mania faded with the puppet destroyed. However, Rhino's efforts allowed Wesker's mania to return and together with Rhino, they rebuild Scarface.[7] Scarface took drastic measures against the Street Demonz and reclaimed his lost empire by force.[8][9]

After escaping from Arkham, Wesker tried to recover Scarface and was forced to make due with a sock puppet ("Socko");[10][11][12] this made Scarface furious when he returned, and he and Socko fought, with Scarface, of course, emerging the victor. During the events of No Man's Land, Scarface was one of the top territory holders in Gotham City, and commanded his own entire community.

After Wesker was attacked by The Body, Scarface was the only surviving member of the crew and told Batman all he knew about this new enemy.[13] Wesker was then taken to a hospital to recover and when The Body tried to attack him again, Robin used Scarface as a decoy before eliminating them.[14]

Comically, when Wesker throws his voice, he cannot pronounce the letter 'B', and had to substitute it with the letter 'G', so with him Scarface always talked with an impediment; i.e. "I'm gonna riddle you with gullets, Gatman!"

Shortly after Batman and Robin inspected Wesker's murder site during "Face the Face", Scarface was picked up by a woman named Peyton Riley. Riley was a depressed former mafia princess whose husband had just had her whacked, and she had been bleeding out in the next room when she overheard Wesker's murder. She had met with Arnold Wesker when he was the Ventriloquist, and Wesker had liked her enough that Scarface pardoned her and her husband from an execution (her husband had been stealing from him, and Wesker still demanded a 30% cut of all of his future profits). When she found Scarface, he started talking to her, and she barely managed to grab him and drag herself to the hospital, where she eventually recovered from her wounds.

Although Scarface's classical personality is exactly the same with her, the Scarface/Ventriloquist relationship is different. She has him acting as her boyfriend, and Scarface seems to believe himself to be in love with her, going so far as to call her "Sugar" instead of "Ventriloquist." When nearly captured by Batman and Harley Quinn (who has a strong dislike for Sugar), she has Scarface say, "Save yourself."

Scarface and Peyton later attempted to throw Peyton's ex-husband over the side of his own yacht, only to be interrupted by Batman and Zatanna, Zatanna attempting to talk Peyton down while Batman rescubed Sabatino. Unfortunately, Zatanna was attacked by Moose, Scarface's henchman, before she could have any real effect, Peyton subsequently going over the side with Sabatino while Batman was busy protecting Zatanna from Moose. Before they hit the water, Scarface said "G'bye, kiddo. I loved y..."

Retrieved from "https://dc.fandom.com/wiki/Scarface_Puppet?oldid=2793650"
Community content is available under CC-BY-SA unless otherwise noted.