Scavenger is a name used by multiple characters in the DC Universe. The most well-known is Peter Mortimer, an evil deep-sea diver who has been an enemy to Aquaman and Atlantis. He is a pirate dedicated to plundering the treasures of the ocean, and this makes him a menace to all sea life. Peter Mortimer was created by Bob Haney and Nick Cardy, first appearing in Aquaman #37. (1968)

There is a second Scavenger who has been an enemy to Superboy. He is an ancient and powerful figure who has dedicated himself to collecting various artifacts. These include mystical objects and advanced technological devices, which have given him a variety of useful powers. This Scavenger was created by Karl Kesel and Tom Grummett, first appearing in Superboy (Volume 4) #2. (1994) 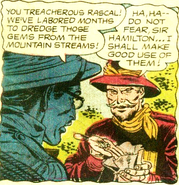 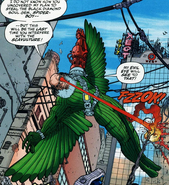 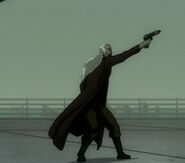