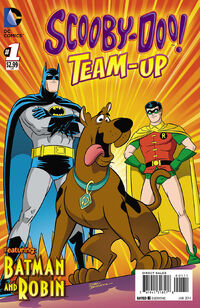 Scooby-Doo! Team-Up was a crossover comic series, which was published from 2014 to 2019. Each issue, Scooby-Doo and Mystery Inc. got involved in solving another mystery as usual, but this time with either the help of guests from the DC Universe or Hanna-Barbera TV series. It was somewhat of a spin-off of the TV series, The New Scooby-Doo Movies, which featured the same principles, only with real celebrities, Hanna-Barbera characters, and occasionally Batman and Robin. This was acknowledged by having them as the first special guests.

Note: This was the print edition of the digital series Scooby-Doo! Team-Up (Volume 1 (Digital)). Each print issue printed two of the digital chapters.

Retrieved from "https://dc.fandom.com/wiki/Scooby-Doo!_Team-Up_Vol_1?oldid=2506496"
Community content is available under CC-BY-SA unless otherwise noted.