Secret is an incorporeal super-hero and member of Young Justice. Having been killed by her adoptive brother Billy, she remained stuck on this plane of existence as a ghost. This makes her a gateway between the living and the dead, allowing her abilities including flight, teleportation, shapeshifting, and taking souls to the other side. Her brother is the super-villain Harm. Secret was created by Todd DeZago and Todd Nauck, first appearing in Young Justice: The Secret #1. (1998) 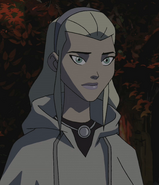 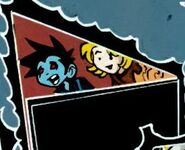