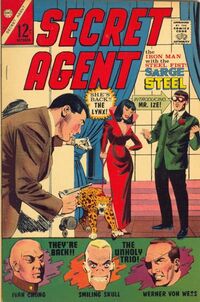 Secret Agent was published from October of 1966 to October of 1967 by Charlton Comics. It continued the numbering sequence from the Sarge Steel title and only lasted two issues. Stories chronicled in these issues have been retroactivelly allocated to Pre-Crisis Earth-Four continuity.

Retrieved from "https://dc.fandom.com/wiki/Secret_Agent_Vol_1?oldid=2258018"
Community content is available under CC-BY-SA unless otherwise noted.