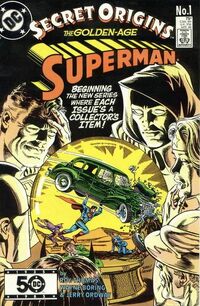 Secret Origins was an ongoing comic book series published from 1986-1990. It spanned a total of fifty individual issues as well as three annuals and one special. Unlike Secret Origins (Volume 1), this series did not reprint older material, but provided fresh artistic interpretations of various characters, based upon the framework provided by their original authors. The initial format of the series focused on the history of a single character, alternating issues between characters germane to the Golden Age and those indicative of the modern age. Beginning with issue #6, the title changed to a double-sized format and featured at least two character stories per issue, one Golden Age tale, and one modern tale. Occasionally, the series would alter its format to accommodate multi-title tie-in stories including Legends crossover events and Millennium crossover events. With the exception of issues #32-35, each issue of Secret Origins was a self-contained comic with no lead-ins to previous or later issues. Secret Origins #32-35 was a multi-issue event chronicling the entire career of the Justice League of America and its various members.

Retrieved from "https://dc.fandom.com/wiki/Secret_Origins_Vol_2?oldid=1479521"
Community content is available under CC-BY-SA unless otherwise noted.