"The Coming of Clayface!": Inside a hospital in Gotham City, a mysterious shape-shifter infiltrates the room where Basil Karlo is recovering from a serious illness. The intruder then asks Karlo why was he called Clayface and how did he came to become the first vil

"The Coming of Clayface!"

The Coming of Clayface!

The Tragic Though Amusing History of Clayface II

His Name is Clayface III!

The Batman has not seen the last of me...


Appearing in "The Coming of Clayface!"

Synopsis for "The Coming of Clayface!"

Inside a hospital in Gotham City, a mysterious shape-shifter infiltrates the room where Basil Karlo is recovering from a serious illness. The intruder then asks Karlo why was he called Clayface and how did he came to become the first villain to adopt the name. With nothing else to do, Karlo decides to tell the intruder the information required.

Years ago, Bruce Wayne and Dick Grayson were invited to the Argus Motion Picture Studio by Bruce's girlfriend, Julie Madison, who was part of the cast on the upcoming movie "The Terror", a remake of a classic horror film. In the studio, Bruce and Dick were introduced to most of the members of the cast and crew, including Basil Karlo, the most notable classic horror actor, who portrayed the main role in the original film. In the remake, he worked as a technical and make up consultant and was unnoticed by the main members of the cast.

While filming one of the horror scenes of the movie, the light went out and the main actress was murdered in the dark. Bruce and Dick take the chance to change into Batman and Robin and they investigate the crime scene, finding clay residues in the woman's nails, which indicate that the killer had clay on him. Batman and Robin continued their investigation and they went to the place of the actress' boyfriend, who was also part of the film and was in bad terms with the victim. When they entered the place, they found the man stabbed in the chest and the killer was still lurking in the shadows. The Dynamic Duo confronted the criminal, but he managed to escape thanks to an accidental fire that started as a result of the struggle. Even though the criminal escaped, Batman got a glimpse of the man's face, covered in clay.

Back at the studio, Julie Madison was assigned as the new main actress and she was about to perform the same scene in which the previous actress was killed. Clayface was ready to strike, but he was promptly stopped by Batman and Robin. With the killer captured, Batman removed the mask of clay and revealed the man's identity as Basil Karlo, who started the killing spree in order to stop the remake of his movie, which he considered his best performance. Clayface was taken in by the authorities, swearing revenge upon Batman. In the aftermath, Julie told the exciting events to Bruce and Dick, unaware that they already knew exactly what had happened.

When Karlo ends the story about his origin, the intruder reveals herself as The New Clayface, who was created by Kobra to fight against the Outsiders. Although her team failed and most of them were captured, she was allowed to escape thanks to Looker for unknown reasons.


Appearing in "The Tragic Though Amusing History of Clayface II"

Synopsis for "The Tragic Though Amusing History of Clayface II"

For his entire life, Matt Hagen was a complete waste of a human being until he learned about an ancient sunken ship which was believed to contain valuable treasures inside. Stealing a motorboat and using some cheap diving equipment, Hagen submerged in the general location where the ship was supposed to be. 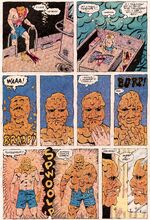 Origin of Clayface II
Eventually, he found the old Spanish ship, but the only thing he found in the treasure chest were some strange looking urns. Hagen ignored the warning written in Spanish about the content of the urns and he opened one of them, releasing a strange substance that covered his body, transforming the very state of it.

Disappointed, Hagen swam to the surface, but he hit his head on a rock, blowing his head into a pile of clay. A headless Matt Hagen reached his boat, pondering how he could still be alive without a head. At the mere thought of his head, he formed a new one made of clay. Using this ability, Hagen turned his entire body into clay. Losing all hope of ever being a normal person again, Hagen tried to commit suicide by shooting himself in the head, but the bullet went right through his body without causing him any harm. This realization gave him hope and using his powers, he managed to shape his head back to normal.

With his new ability, Hagen started a criminal spree in Gotham City, but he was eventually tracked down by Batman. In his escape attempt, Clayface got himself inside a furnace and was burned. Batman and the Gotham City Police Department presumed Clayface was dead, but in reality, Hagen had survived and he only lost his shapeshifting abilities. After this experience, Hagen went back to the ocean and used the mysterious substance to become Clayface again, but the outcome was the same.

After a number of accidents that removed his powers, Hagen used the last urn with the strange substance to become Clayface one more time. Unfortunately, his powers were completely useless during the Crisis on Infinite Earths, as he was killed by one of the Anti-Monitor's Shadow Demons. The only thing that remained of Hagen was a spot of dry clay in the ground.

In the present, a mysterious man has located the last remaining piece of Matt Hagen and he takes it in order to fulfill his master plan.


Appearing in "His Name is Clayface III!"

Synopsis for "His Name is Clayface III!" 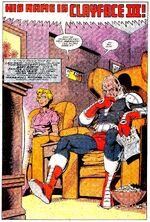 One night in Arkham Asylum, a new guard is introduced to the many familiar faces of the damned place including the impostor Mad Hatter, Two-Face and Joker, but he is far more intrigued by one of the most unusual inmates: Clayface III.

The two guards watch as Clayface III, whose real name is Preston Payne, sits in front of a TV with a mannequin that he calls Helena, sitting by his side. Clayface III becomes excited when a TV program will broadcast a show about Batman's villains and he would be the next one showcased. However, the documentary about his criminal career and origins is rather small, insignificant and considered irrelevant even when compared with Kite-Man!

This causes Clayface III to lose his temper and he goes on a long rant about his real origin. Preston Payne was born acromegalic, which caused hideous disfigurements in his body and face. Despite this setback, Payne had a brilliant mind and accomplished many academic achievements. As an adult he started working at S.T.A.R. Labs and he learned about Matt Hagen, the shapeshifter criminal called Clayface. Payne visited Hagen in prison and managed to get a sample of his blood, which he used to replicate the genetic coding that allowed Hagen to transform his body. The experiment was successful at first sight and Payne shaped his face and body to become the handsome man he always dreamed. Unfortunately, the side-effects kicked in very quickly and his skin started to melt while his touch became lethal. Without other options, Payne designed an exo-suit to sustain him and he also started killing people to relief the pain.

These actions caught the attention of Batman and he eventually stopped a disturbed and deranged Clayface III, who was soon sent to Arkham by the authorities. After Clayface III finishes his long rant, the guards are still intrigued as to what caused him to go on such a long explanation, since the TV is actually broken and there is nothing ever on broadcast.