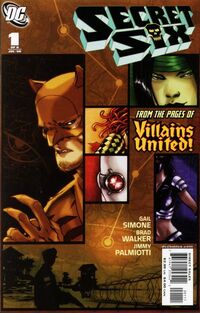 Secret Six (Volume 2) was a six-issue limited series published by DC Comics from July of 2006 until January of 2007. The series spins off from the 2005 mini-series, Villains United - a prequel project to DC's summer crossover, Infinite Crisis. Despite its title, the Secret Six from this series bears no connection to the team featured in Secret Six (Volume 1).

Retrieved from "https://dc.fandom.com/wiki/Secret_Six_Vol_2?oldid=2652060"
Community content is available under CC-BY-SA unless otherwise noted.