"A Debt of Significant Blood"

A Debt of Significant Blood

"Thank you for saving me, Mister Batman!" HAHAHAHA! He thought you were Batman! HAHAHAHAHAHA!

Appearing in "A Debt of Significant Blood"

Synopsis for "A Debt of Significant Blood" 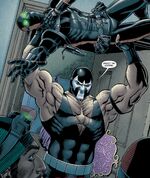 After the news of Batman's death, several criminals have decided to seize the chance and create chaos in the city. Among them, a group of mercenaries are planning an attack on three of the most influential families in Gotham City. The first team break into the first house and look to kill the child of the family. When they realize that the child is not on her room, they look for her on the maid's room, who happens to be an illegal immigrant. The leader of the team commands the others to shoot the immigrant and suddenly, a voice from behind them repeats the command. When they turn around, they are confronted by Bane, who encourages them once again to "shoot the illegal", as he is also an illegal. Bane then breaks one of the mercenaries' spine and breaks the neck of another, forcing the rest of the team to lock themselves inside the maid's room. They think they're safe, but Catman breaks through the window and beats almost all of them. When Bane enters the room, there's only one mercenary left and he threatens to kill the child if they try to attack him. Bane and Catman are surprised to be treated as heroes, but they are not stopped by the threat. Bane attacks the mercenary and tears his arm off before grabbing him and prepare his finisher move. However, because of the pleads of mercy from the criminal, Bane decides to toss him through the window instead. Catman realizes that there is one mercenary unnacounted for and he leaves Bane alone with the little child as he starts looking for the mercenary, who is currently trying to escape the place. Catman can't reach the escaping mercenary, but he allows Ragdoll, who is wearing his own crooked version of a Robin costume, eliminate the fugitive. AS they take care of that situation, Bane is dealing with the family, who are thankful for his help saving their daughter. They all want to know the name of the man who saved their little one, and Bane, talking in a sad way, replies that Batman saved her. When Bane leaves the place, Ragdoll appears and steals an antique.

Bane, Catman and Ragdoll are heading towards the Catmobile when they start discussing the reasons why they can and cannot replace Batman. Bane and Catman have their own motivations to try to emulate the dark knight, but they know that they can't replace the man, despite their best efforts. They all travel to the second place and upon arriving, Catman and Ragdoll manage to get inside the place through the outside fence, but Bane is unable to fit through or jump over it. Instead, he chooses to break the whole fence with one blow, which in turn, alerts the mercenaries inside about their presence. The leader of the criminals sends two of his men to check the outside and eliminate any threats, but when they get outside, Ragdoll attacks them by surprise and Bane uses their own weapons to kill them. Bane then rips their heads off and throws them inside as a warning to the other criminals. Bane and Catman break inside the place and they kill one mercenary each, leaving one mercenary left, who tries to use the child of the family as a hostage, but he is attacked by Ragdoll, who breaks several bones of his body by using his own body as a deadly trap thanks to his contortionism abilities. As they start leaving the place, the child approaches Catman and thanks him for saving his life, but he mistakenly addresses Blake as Batman.

Later, as they arrive at the third location near the harbor, Ragdoll is still laughing at the fact that the kid mistook Catman for Batman. Using the Catmobile, they arrive at the boat house where the last family was kidnapped by mercenaries and they smash the vehicle against the place, taking down most of the criminals. The three of them start attacking the mercenaries and soon they have the situation under control. However, when they are ready to eliminate the criminals, Nightwing appears, stops them from murdering the criminals and commands them to leave the city. Catman is furious to be dismissed as usual and he argues that they were helping out of respect for the fallen hero. Catman is ready to fight Nightwing, but Bane calms him down, telling him that it's time for them to leave. Catman tells Bane that Nightwing has no right to command them, since he is and can't be Batman, but Bane thinks otherwise.

The trio leaves the place and walk to the nearest street, where they find a new car. Catman breaks inside and starts the engine, stealing the vehicle. After their final encounter, Ragdoll takes off the Robin costume and tells his partners that despite their great qualities, he thinks that none of them would be a good Batman. Catman and Bane dismiss the idea as ridiculous and abdsurd and they all leave Gotham in the stolen car.

Retrieved from "https://dc.fandom.com/wiki/Secret_Six_Vol_3_9?oldid=2180543"
Community content is available under CC-BY-SA unless otherwise noted.