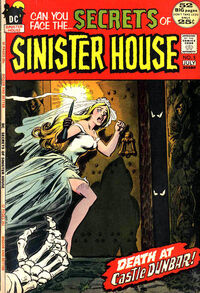 Secrets of Sinister House was an anthology horror series published from 1972-1974. The series continued the numbering sequence from Sinister House of Secret Love (Volume 1). This series was hosted by Eve, an old witch with an affinity for ravens, who later appeared in The Sandman as a denizen of the Dreaming and mother of Cain and Abel.

Retrieved from "https://dc.fandom.com/wiki/Secrets_of_Sinister_House_Vol_1?oldid=2222126"
Community content is available under CC-BY-SA unless otherwise noted.