Seekers into the Mystery (Volume 1) 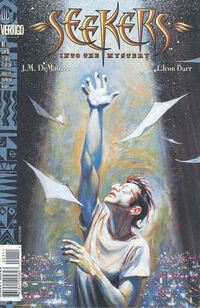 Seekers into the Mystery is a 1996–1997 ongoing series developed by J.M. DeMatteis under the Vertigo imprint. The comic follows Lucas Hart as he discovers the ability to use astral projection to learn secrets of the mind and the universe.

The series' logo was designed by Nancy Ogami.[1]

Back to Comics Contents : Comics S : Seekers into the Mystery Vol 1

Retrieved from "https://dc.fandom.com/wiki/Seekers_into_the_Mystery_Vol_1?oldid=2544002"
Community content is available under CC-BY-SA unless otherwise noted.