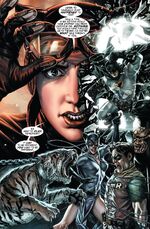 Catwoman was a longtime enemy of Batman. She was a cat burglar who was smitten with the Dark Knight.

Knowing Batman was hunting The Joker, Catwoman falsely told the Gotham City Police Department that she knew where Joker was, hoping this would result in Batman hunting her instead. Her plan worked and Batman confronted her during a burglary. When he coldly demands to know where The Joker is, Catwoman revealed she made the story up just to get him to come for her. As he left in anger, she called after him that he had changed. He used to be more determined to pursue her, more willing to play. Annoyed, he gave in and chased her, but when she makes a desperate leap across a gap between buildings, he missed his mark and fell into the alley below and Selina escaped.[1]

Retrieved from "https://dc.fandom.com/wiki/Selina_Kyle_(Batman:_No%C3%ABl)?oldid=2290022"
Community content is available under CC-BY-SA unless otherwise noted.