Selina Kyle is Catwoman, a notorious thief from Gotham City, whose conflict between his criminal activities and her affection for Batman would often cause her to be part of irregular situations.

Selina Kyle started operating as the notorious burglar, the Cat and she would end up battling Batman and Robin. Stealing the necklace of Martha Travers, the Cat would be foiled when Batman sees through her disguise, however she manages to get away and Robin suspects that Batman let her get away on purpose.[4]

After a series of spectacular crimes, she had reformed but after reading an article in the Gotham Gazette about Batman's greatest cases, an infuriated Selina Kyle resumed her life of crime as Catwoman. She committed a number of cat related crimes until Batman and Robin intervened, capturing her gang but she escaped in a boat.[5] In an attempt to smuggle stolen jewels through a beauty pageant, Selina entered the pageant and attempted to convince Batman that the crimes were being committed by a second Catwoman, but ultimately failed.[6] In a more successful jewelry theft, Catwoman fled to a remote island and succeeded in capturing Batman. However, when her hired men wanted to kill the Caped Crusader, the Catwoman set him free.[7]

After an extended leave of absence, Catwoman returned and used Lois Lane as a pawn to murder the Penguin, but this scheme was thwarted by Batman, Robin and Superman.[8][9] Later, Catwoman became jealous of Batgirl, Batman's new female partner[10] and she tried to gain Batman's attention by making Batgirl look bad. Her plan backfired and she was defeated by Batgirl, just to be captured by Batman on the aftermath.[11] When a west-coast crime family tries to place a stake in Gotham City and target Batman for death, Catwoman and various other villains thwart this plot wanting the glory of killing Batman all to themselves.[12]

Jailed and later paroled, Selina would open a slenderizing salon in a front to train a group of ex-cons in stealing the Potala Pearl from the Nizam of Nepal, this attempt is also foiled by Batman[13]. Back in jail, Catwoman is attempted to be sprung by a woman named Bertha, however this attempt was foiled by Black Canary[14]. While seeking out the rare gem called the Fist of Flame, Catwoman would clash with Wonder Woman. Eventually escaping, the duo along with Wonder Woman's trainer I-Ching are transported to the world of Nehwon[15]. There, Catwoman would aid Wonder Woman and I-Ching in foiling I-Ching's daughter Lu Shan from obtaining both the First of Flame and the Eye of the Ocean and using both gems to rule both Earth and Nehwon.[16]

Returning to Earth, Catwoman next attemptted to steal a pair of white tigers from a circus that she has infiltrated, but she was eventually defeated by Batman and Robin.[17] While on transport for the Gotham Penitentiary, Selina and the rest of the inmates escaped thanks to an unfortunate accident. She returned to Gotham where she resumed her old costume and gathered her old gang in order to start back her criminal career. During her first caper, she was captured by Batman when her pet cat Hecate led the Caped Crusader to her hideout.[18] Free once again, Catwoman attempted to steal a priceless feline owned by an actor, leading to a clash between herself, The Joker and the actor.[19] Selina would return as Catwoman once more, but she learned of a copy-cat by the name of Catgirl. As she tried to get rid of the young imitator, Catwoman was once again captured by Batman.[20]

Next, Selina became an ambassador to the nation of Sudaria and attempted to the steal blue prints to a new US defense device called "Peter Rabbit". However this attempt was thwarted by Batman and Wonder Woman, although Catwoman managed to escape.[21] When Batman is seemingly killed the criminal underworld holds a court to interrogate those who claim that they killed Batman. Catwoman is one of the many costumed criminals that testify that they killed Batman, however her testimony is revealed to be nothing but a hoax by Two-Face (really Batman in disguise) who reveals that Catwoman made up the story in order to convince the underworld leaders that she is capable of killing.[22] Teaming up with Poison Ivy and crooked fortune teller Madame Zodiac, Catwoman begins another crime spree until she is thwarted by Batgirl, Batwoman and Huntress.[23]

Reformation and Romance with Batman

Selina reformed from her career in crime, and even invested money into the Wayne Enterprises.[24] She continued working with the Wayne Enterprises[25] and meeting with Bruce Wayne.[26] However, when she learned that Wayne had her under the close supervision of Lucius Fox,[27][28] she tried to break relations with Wayne,[29], but the pair reconciled when Bruce apologized for the background check personally.[30] She later attended costume ball at the reopening of Wayne Manor as Bruce Wayne's date.[31]

Selina was present at the Wayne Foundation Penthouse when the Joker kidnapped Alfred Pennyworth as part of a plot to lure Batman into a trap. Though Selina tried to stop the Joker, he tricks her and renders her unconscious[32] Afterwards, Selina learned that she was suffering from a rare lethal disease that can only be cured by an ancient Egyptian herbal medicine.[33]. When the cure was stolen from the Gotham Museum, Catwoman was suspected of the crime and she was hunted by Batman, unaware that the real crook was Cat-Man.[34] Escaping from Cat-Man's deathtrap, Batman and Catwoman tracked Cat-Man to Greece where they failed to recover the cure, but nonetheless Selina was cured thanks to Catman's costume and its mystical properties.[35] Following her recovery in the hospital, she left Gotham City to sort herself out, upset at Bruce Wayne for being unable to trust her.[36] Catwoman was soon contacted by Robin, who wanted her help to prove Talia al Ghul was using Batman, but she abandoned the case when she saw Batman kissing Talia. Although Catwoman was no longer interested in helping Batman, she was determined to find Talia's connection to recent crimes.[37]

Investigating things further, Catwoman and Robin travelled to China after a tip from Commissioner Gordon. There, their investigation led them to a local criminal, who captured them threatened to inject them both with a lethal dose of cocaine.[38] Catwoman and Robin saved themselves and were later joined by King Faraday. Together, they all travelled to Infinity Island only to be captured by Talia and her father Ra's al Ghul.[39] Batman eventually defeated Ra's al Ghul in battle, freeing Robin, Catwoman and Faraday while Ra's al Ghul would seemingly perish.[40]

Later, Selina asked Batman to track down her sister, who had escaped from prison, a quest that would lead to Batman being encountering the Swamp Thing.[2] After aiding Batman in his battle against the Manikin[41] she was captured by a man who believed himself the reincarnation of an ancient pharaoh, while also believing that Selina was the reincarnation of his bride. Selina was rescued by Batman and she returned to Gotham to resume her relationship with Bruce Wayne.[42] Unfortunately, Cat-Man had survived their previous encounted and went after Batman and Catwoman for revenge as he blamed them for his face being scarred. Although Batman defeated Cat-Man, Selina decided to leave Gotham to organize her life.[43]

Going solo again, Catwoman investigated the ghost train between Gotham City and Chicago[44] and learned that it was all a ruse orchestrated by an Ex-Nazi, seeing revenge against Catwoman for her father's killing of his father.[1] Selina was next hired by a union president Daniel Brown as his bodyguard, but Catwoman failed to stop an assassination attempt when she was distracted battling bikers.[45] The attempt failed to kill him, but did put Brown in a wheelchair. To redeem herself, Catwoman used this vulnerability to force out the attacker.[46] Later, Selina woke up in the hotel room of a murdered woman and was forced to pose as the woman in order to expose her killers.[47] For this reason, Selina was caught up in a case of mistaken identity against loan sharks, which she eventually defeated.[48] Afterwards, Selina met with an old member of her gang, and after suspecting the man may still be a criminal she tried to capture him, only to learn he had reformed.[49]

Upon returning to Gotham, Selina learned that during her absence Bruce had started a relationship with reporter Vicky Vale, and after threatening Vale[50] and causing her serious wounds, she was confronted by Batman. After a vicious encounter, they came to a peaceful understanding and Selina understood that she had lost Bruce for good.[51] Later, Catwoman helped Batman, Robin, Batgirl, and Talia against some of Batman's greatest foes.[52]

Final Days of the Cat

Catwoman disappeared for a short time until she eventually returned to Gotham and helped Batman defeat the terrorist Darkwolf.[53][54] 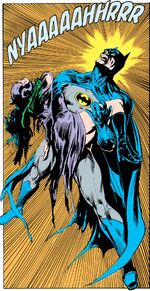 During Crisis on Infinite Earths, as the conflict causes a red rain to fall in Gotham, Catwoman's reputation was soiled by the murders of Night-Slayer, which were blamed on her.[55] Catwoman tried to capture Nocturna in order to get to the Night-Slayer, but Batman confronted her and while battling him, she was struck by lightning.[56] Batman aided the injured Catwoman and the two realized that they still loved each other[57] and worked together with Robin to defeat Night-Slayer.[58]

Catwoman continued her career in Gotham as the new vigilante in town, thanks to Batman's convincing of Commissioner Gordon.[59] Working with Batman, she also teamed-up with Green Arrow and Black Canary to take down a corrupt corporation.[60] Hoping to get Robin's approval, Catwoman joined him on a case to stop a street gang[61] and later she worked with Batman, Robin and Harvey Bullock against the Film Freak.[62][63][64] However, when Two-Face escaped from prison and Batman worked behind her back to capture him, she lost trust in the caped crusader and despite the fact that she assisted him in capturing Two-Face, she put their relationship on hiatus.[65][66][67][68] Finally, Catwoman helped Batman in tracking down and capturing a mad murderer, but she parted ways with him shortly afterwards.[69][70].

In her last recorded adventure, Catwoman aided Batman against a combination of his greatest foes.[71] After this, the unified timeline resulting from the collapse of the Multiverse into one reality assumed definite structure, and a consequence of this was that the details relating to the personal history of Catwoman were vastly changed.

Retrieved from "https://dc.fandom.com/wiki/Selina_Kyle_(Earth-One)?oldid=2725195"
Community content is available under CC-BY-SA unless otherwise noted.