She's clever and beautiful, yes... And it's a shame that we both work on opposite sides of the law; but I hope-- I mean-- I know we'll meet again-- soon!

Selina Kyle was the master thief Catwoman. An enemy of Batman, she eventually reformed and married him. Their daughter became Huntress.

Selina Kyle was born in the year 1920. By the time Selina was eighteen years old, she found herself trapped in an abusive marriage to a man who valued personal wealth and status over family. She eventually left her husband, and turned her aggression towards crime. In 1938 she donned a disguise and become a professional jewel thief known as the Cat.[2]

In one of her earliest adventures, the Cat made a play to steal a valuable diamond necklace from a rich heiress named Martha Travers. Several criminal gangs likewise sought the necklace, and the theft earned them the attention of Batman and Robin. Robin was the first to learn about the mysterious Cat and revealed his findings to Batman. Batman encountered the disguised thief, whereupon she attempted to convince him to give up his heroic lifestyle and join her crew. Batman was unwilling to entertain such a notion, but found himself attracted to the seductive thief nonetheless. Even though he captured her, he "allowed" her to escape his clutches.[3]

A short time later, Batman encountered the Cat a second time; however, she was now calling herself the Cat-Woman. Batman bargained with her in order to learn the whereabouts of a much deadlier adversary – the Joker. Although the Dynamic Duo gave pursuit, Catwoman managed to escape by diving into Gotham River.[4]

Later, as Cat-Woman started using a cat mask, an organization known as the Diamond Syndicate hired her to steal a large quantity of diamonds. The theft was actually a front, enabling the Diamond Syndicate to collect on the insurance money. Batman and a Gotham City police detective named McGonigle investigated the case, but once again, the Catwoman managed to elude capture.[5]

Catwoman soon resurfaced, this time assuming the guise of wealthy socialite Marguerite Tone. As Tone, Catwoman and her gang prompted a faux scavenger hunt, which turned out to be yet another scheme to steal precious valuables. Batman investigated the case, and captured the Catwoman, whereupon she kissed him. Once again, Batman found himself in an awkward position and allowed Catwoman to escape from captivity.[6]

Not long after this event, Catwoman met playboy millionaire Bruce Wayne. Unaware of Wayne's dual identity as the Batman, she ironically began to fall in love with him. Wayne was determined to bring Catwoman to justice, but unlike his other foes, Bruce believed that he could reform Catwoman. Disliking the idea of rehabilitation, Selina continued to conduct a crime spree, though ultimately Batman captured her – this time sending her to prison.[7]

Selina soon escaped confinement and embarked upon one of her most courageous schemes to date. Selecting Bruce Wayne as her next target, Selina adopted the identity of a socialite's maidservant, Belinda. She lured Wayne's butler, Alfred Beagle, into a trap – a trap that culminated in bringing Batman and Robin to her lair. She managed to capture the Dynamic Duo, and used their captivity as an opportunity to raid Wayne Manor. Batman and Robin managed to escape however, and using Alfred as a decoy, succeeded in apprehending the Catwoman.[8] 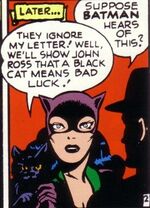 Never one to stay in prison for very long, Selina soon escaped and reformed her criminal gang. This time, she decided to change her outfit and dropped the cat-head mask in favor of a leather head piece with cat ears that covered her face, but left her mouth uncovered similar to Batman's own cowl. With this new outfit, the nature of her crimes became more feline, often using household cats to aid her in her criminal endeavors. However, during an incredible criminal spree, she was eventually confronted by Batman and Robin once again, and on her escape attempt she fell to a chasm to her apparent death.[9]

Catwoman later reappeared and started a crime spree during Christmas Holidays and she stole different cats with the purpose of using them on her crimes. Batman confronted her and stopped her once again. She tried to convince him to join her in crime, but Batman refused.[10] After a short time in prison, Catwoman escaped using a couple of new gloves with especially sharp fingertips, which she used for climbing. After this, Catwoman created her own vehicle to match Batman's Batmobile and thus the Kitty Car was created. With her new vehicle, Catwoman started a new crime spree themed after black cats and she managed to outrun the Dynamic Duo and their Batmobile, escaping from their grasp.[11]

After this, it is revealed that Catwoman did ended up in prison, but soon after she broke out and started a crime spree, basing her crimes on famous fictional cat stories. This time she was capable of outsmarting the Dynamic Duo on a couple of times, but in the end she was captured her on her escape attempt.[12]

Catwoman escaped from prison again and when she learned that she wasn't included in a book about historic villain women, she started a set of crimes to prove that she was most evil of them. Catwoman's criminal spree was successful until she was captured and arrested by Batman and Robin.[13] The next time she broke free, she started crimes based on fashion trends and she manages to steal from various wealthy people. She was eventually captured by the Dynamic Duo.[14]

Some time later, during one of her usual crimes, a brick struck Selina Kyle in the head re-awakening years of suppressed memories. Selina claimed to have suffered from partial amnesia for the past ten years, and attributed her criminal lifestyle as a side effect of the amnesia. With her "true memory" restored, Selina Kyle helped the Dynamic Duo capture the criminal known as Mister X and afterwards, she gave up her life as a criminal and revealed her secret identity to Batman.[1]

As a civilian, Selina Kyle opened up her own pet shop in Gotham City, but was forced to use the guise of Catwoman to apprehend a gangster named "Whale" Morton – a man who unsuccessfully attempted to lure Selina back into a life of crime.[15] Finally, Selina was able to turn her brother, Karl to the good side of the law after he adopted the identity of the "King of the Cats" and followed his sister's steps into crime.[16]

Selina Kyle and Bruce Wayne resumed their romantic relationship, and in the two were wed.[17] Although Selina was retired from costumed adventuring, Bruce Wayne continued to function as Batman, and together they gave birth to a daughter, Helena Wayne. Helena would ultimately follow in the footsteps of her parents, and grew up to become a costumed adventurer known as the Huntress.[18]

Selina's criminal past caught up with her. One of her former underlings, a henchman named "Silky" Cernak blackmailed Selina into resuming her Catwoman identity. He forced Selina's obedience by way of a falsified photograph which showed her murdering a Gotham City police officer. Cernak forced Catwoman to rob the Gotham City Civic Center. Commissioner James Gordon caught wind of the incident and contacted Batman for assistance. The aging crime-fighter arrived at the Civic Center and fought with Cernak's goons. Kicking a gun from an assailant's hand, the weapon went off, shooting Catwoman in the chest. The blow knocked Selina from a fourth floor mezzanine, where she subsequently fell to her doom. She died cradled in Batman's arms, claiming that "I did it all for you".[19]

Shortly after her mother's death, Helena Wayne donned the costume of the Huntress for the first time and brought "Silky" Cernak to justice. Silky confessed to doctoring the photograph and Bruce and Helena learned that Selina Kyle had never murdered anyone in her life.

Retrieved from "https://dc.fandom.com/wiki/Selina_Kyle_(Earth-Two)?oldid=2799697"
Community content is available under CC-BY-SA unless otherwise noted.