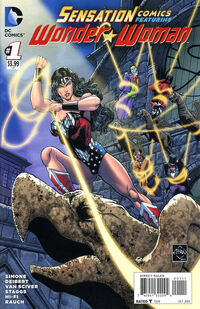 Sensation Comics Featuring Wonder Woman is an ongoing comic book featuring Wonder Woman stories by many different creative teams. All the stories are intended to be "continuity free" and do not fit into the canon of any of the mainstream DC universes (Prime Earth, New Earth, Earth-One or Earth-Two). However, for simplicity's sake, we are indexing them into the universe they most resemble, instead of creating a new universe for each story.

This series is digital first, meaning the stories were first available online, and then later published on paper in this series, collecting three online chapters per issue. The series does not adhere to the original digital organization; chapters are published in a different order than the digital release (except when they form one story) and a few actually appeared in the comic before their digital debut.

Retrieved from "https://dc.fandom.com/wiki/Sensation_Comics_Featuring_Wonder_Woman_Vol_1?oldid=2096441"
Community content is available under CC-BY-SA unless otherwise noted.