The Seven Soldiers of Victory, also known as the Law's Legionnaries, are a super-hero team which fought during World War II as part of the All-Star Squadron. Their adventures originally took place during the Golden Age on Earth-Two. In Pre-Crisis, their founding members were the Vigilante, Crimson Avenger, Green Arrow, Speedy, Shining Knight, the Star-Spangled Kid and Stripesy.

Following the Crisis on Infinite Earths, a new version of the Seven Soldiers developed as part of the mainstream DC Universe.

The Seven Soldiers of Victory was created by Mort Weisinger and Mort Meskin, first appearing in Leading Comics #1. (1941) 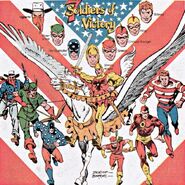