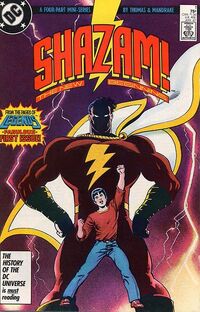 Shazam!: The New Beginning was a four-issue limited series published from April to July of 1987. It re-introduced the character of Captain Marvel into the continuity of the Post-Crisis DC Universe and brought back some of his classic adversaries, including Black Adam and Doctor Sivana. Due to a second Post-Crisis reboot in the title The Power of Shazam! (Volume 1), this series is no longer considered part of the canonical DC continuity.

In this interesting continuity, as main differences, Black Adam was exiled in other dimension, and not reincarnated, having been returned by a Sivana's gadget; Doctor Sivana and Dudley were real uncles to Billy Batson; Billy's relatives died in a car accident; the Wizard Shazam died soon after give powers to Billy; no Marvel Family, just Captain Marvel. The most notable change that Thomas, Giffen, and DeMatteis introduced into the Captain Marvel mythos was that the personality of young Billy Batson is retained when he transforms into the Captain. This change would remain for most future uses of the character as justification for his sunny, Golden-Age personality in the darker modern-day comic book world, instead of the Golden Age depiction, which tended to treat Captain Marvel and Billy as two separate personalities. Also, the minisseries instils any Cap's previous adventure was erased of existence (including his participation in Crisis), since he begun his career in that time.

This revised version of Captain Marvel also appeared in one story-arc featured in the short-lived anthology Action Comics #623–626 (October 25 – November 15, 1988).

Retrieved from "https://dc.fandom.com/wiki/Shazam!:_The_New_Beginning_Vol_1?oldid=2281945"
Community content is available under CC-BY-SA unless otherwise noted.