Billy Batson is Shazam, a young hero empowered with the gifts of ancient gods by the Wizard.

Billy Batson became an orphan at a young age after his parents, C.C. and Marilyn Batson, died. After the death of his parents, Billy became cold and cruel to most people. Growing selfish and heartless, he went from foster home to foster home until he landed in an orphanage in Philadelphia. At the age of fifteen Billy was placed in the care of Victor and Rosa Vasquez, both former foster children themselves, who had already adopted a number of children.

Billy moved in to the Vazquezes' home where he met his new foster-siblings Mary, Freddy, Eugene, Pedro, and Darla. Billy refused to connect to the other children and rejected their attempts to get close to him. The following day, however, Billy stepped in to defend his siblings from bullies who were picking on them at school. That night, he snuck out of the house and was followed by Freddy, and the boys decided to hijack the bullies' father's car. Billy was caught and escaped on an underground train at the metro station.

The train transformed into a gateway to the Rock of Eternity, where Billy met the Wizard. The Wizard searched the boy's soul and saw that he was not perfectly good. When he told him so, Billy was instantly enraged at him for believing that any person is purely good and without flaws. The Wizard accepted Billy's point and looked deeper into his soul. After witnessing all the good Billy had done in his life, the Wizard bestowed his power upon him. With a word, he could transform into the champion, Shazam, and wield the Living Lightning. After granting Billy all of his power, the Wizard died.

At the same time, the ancient champion Black Adam was freed from his prison by Doctor Sivana who, through an accident, gained the ability to see magic with his injured eye. Sivana showed Black Adam the modern world, which Adam was not satisfied with. He started his plans to change the world and, to do that, he left to find the Rock of Eternity. There, he discovered that there was a new champion who Adam was determined to find.

Meanwhile, Billy met up with Freddy. After convincing his foster brother about his newfound superpowers, the duo went out for a night of shenanigans. Seemingly by accident, however, the two seemed to run into all sorts of trouble, all of which Shazam resolved. He helped a woman when she was being mugged, stopped a bank robbery and punched out a man who wanted to rob a store. All the while, they tried to use Billy's adult appearance to achieve goals such as getting money to drink beer. A spirit called Francesca appeared in a mirror to warn Shazam of the emergence of Black Adam, but Billy believed he was just hallucinating. Eventually, Billy got into a fight with Freddy after he told him he didn't want to go home or change back into his teenage form, and the two split up. 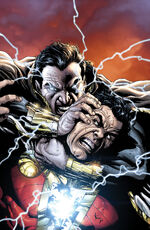 When he was alone, Shazam was finally found by Black Adam who attacked him without remorse. Billy managed to escape by changing back into his mortal form and hid in the zoo with a tiger he regularly visited called Tawny. Freddy told his foster-siblings what had happened, and they found Billy and convinced him to turn back into Shazam to stop Black Adam. They traveled to the metro station to try to return to the Rock of Eternity. There, Francesca spoke to Billy again, and she told him how Black Adam came to be.

Francesca showed Billy visions of a boy and his family who were enslaved in ancient Kahndaq, a country in the East where all magic originated from. The boy was forced to work in mines until his uncle saved him from a guard. The two tried to escape, but in the process they were found by the Council of Wizards. There, the Wizard decided to grant his power to the boy and give him a connection to the Living Lightning, but he refused and wanted to share it with his injured and dying uncle to save him; a wish the Wizard granted.

Seeing this, Billy thought that Black Adam was the boy of ancient times, a lost child just like he was. Not listening to Francesca's pleas, Billy ran out to meet Black Adam, revealing his mortal form to the other champion. In an attempt to talk Adam out of his unholy crusade, Billy tried to appeal to Adam's emotions but was rebuffed. There, Adam revealed that he was not in fact the boy, but the uncle. He killed his nephew when he learned that he did not want to use his powers for revenge. 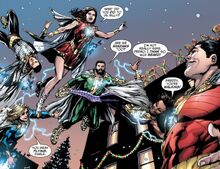 Billy was horrified by this and was saved by his foster family when they drove a car into Black Adam, giving Billy enough time to transform into Shazam. Billy faced his nemesis only to find that Adam had caught his foster siblings. Black Adam ordered Shazam to give him all of his power or he would kill his siblings. Billy remembered a piece of advice the Wizard had told him in his final moments, "Family is what it can be, not what it should be." Shazam realized that this was the secret spell, and he granted all of his siblings the ability to wield the Living Lightning.

They all tried to overpower Black Adam together, but were forced to split up when the Seven Deadly Sins, whom Sivana gathered together, were unleashed upon the city. They summoned a demon which started to destroy the city. Shazam and Adam continued their battle while the other Vasquez children fought off the demon and rescued civilians. Shazam and Black Adam arrived at the zoo where Tawny tried to help Billy and attack Adam. Fearing for the tiger's life, Shazam enchanted him, but the spell backfired and broke the balance of his existing enchantments and his siblings instantly started to feel a loss of power.

Knowing that physically he was no match for Black Adam, Billy turned back into his mortal form and started goading Adam to do the same. The old champion did so in rage, unwillingly killing himself. Because he had not changed back in centuries, his mortal form aged hundreds of years in a single moment, causing his body to turn to dust. The Seven Deadly Sins retreated and the city was saved. In the aftermath, Billy grew closer with his new family. 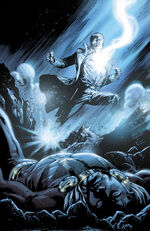 Constantine steals the power of Shazam

After the defeat of Black Adam, Billy gathered his ashes and kept them in a jar. Understanding his enemy and even growing to respect him, Billy decided to honour him by burying his remains in Kahndaq. Unfortunately, the country was a war zone and no intruders were allowed, and, by deciding to go there, Shazam unwittingly sparked the existing tension between the Justice League, Justice League Dark and Justice League of America.

With all three Leagues in a fight and Shazam without a team, John Constantine lured Billy away from the battle with the promise of knowledge of his real family. Constantine, though, successfully managed to steal Shazam's powers to fight a demon, leaving Billy powerless. Together though, Billy and Constantine managed to kill the demon, and Shazam's powers were returned to him - not without hard feelings though.

Deciding to rejoin the battle for Pandora's Box, Shazam touched the Box himself and was corrupted by the evils within. The Box was wrestled from his hands by the other Leaguers, and Billy was returned to normal. Concluding the battle, the Box was revealed to open a portal to Earth 3, allowing the Crime Syndicate to enter their world and trap Shazam, as well as most of the other heroes present, inside the Firestorm Matrix as they prepared to dominate the world.

A few days later, Shazam was released from the Firestorm Matrix after the Crime Syndicate were defeated by Lex Luthor and his Injustice League.

Justice League and the Darkseid War 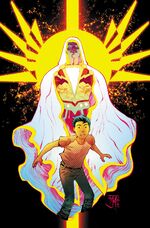 In addition to adding himself to the roster, Luthor invited Shazam to join as well, and the two were eventually approved. As a Justice League member, Shazam helped the team fight and recruit the newest Power Ring as well as handle the outbreak of the Amazo Virus.[1]

When Grail brought a war between her father Darkseid and the Anti-Monitor to Earth that resulted in her father's death, the effects caused a shockwave in the gods throughout the universe. Billy was then summoned to the center of his powers and learned that he was in fact the God of Gods. The Wizard that originally gave Billy his powers informed him that, because of Darkseid's death, the connection to the gods inside of him was severed. In response, the Wizard replaced the gods inside of Billy with new gods to derive his powers from: S'ivaa, H'ronmeer, Anapel, Zonuz, Atë, Mamaragan.

The Justice League, with Shazam among them, managed to fend off the war on their world after the Anti-Monitor was killed as well.[2] With the world back to normal, Shazam decided to leave the Justice League.

In the wake of the chaos caused by the Superman Theory, the bulk of the superhero community traveled to Mars to confront Doctor Manhattan. Billy and the rest of the Shazam Family were amongst these heroes. The combined efforts of Earth's heroes were no match for Manhattan, and they were quickly wiped out.[3]

The Shazam! Who Laughs 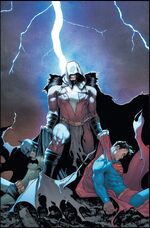 Billy made his way to the Batman Who Laugh's Batcave and awaited the arrival of Superman. Eventually Superman arrived to the scene with Batman, prompting Billy to immediately transform and attack them.[5] Although Shazam was more than a match for the pair when they fought one-on-one, he was eventually overwhelmed and forced to retreat without completing his objective.[4]

Retrieved from "https://dc.fandom.com/wiki/Shazam_(Billy_Batson)?oldid=2860614"
Community content is available under CC-BY-SA unless otherwise noted.