The Silk Spectre is Laurie Juspeczyk, a superhero in the Watchmen universe. Trained as an expert martial artist, she became a hero to follow in her mother's footsteps. This lead her to become a member of the Crimebusters, until the Keene Act banned all vigilantes. Laurie had a relationship with Doctor Manhattan during her time in the Crimebusters, and later became involved with the second Nite Owl as a civilian. Her mother is the original Silk Spectre, Sally Jupiter, and her father was the morally ambiguous Comedian. Jupiter was a burlesque dancer who designed a costume and became a member of the Minutemen. Silk Spectre was created by Alan Moore and Dave Gibbons, first appearing in Watchmen #1. (1986) 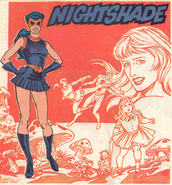 Nightshade
Earth 4
Based on Sally Jupiter