All those who tormented me will suffer...particularly those who call themselves Titans. Oh, indeed. They will pay the harshest price of all...and you will be the instrument of my vengeance.

Psimon is one of the founding members of the Fearsome Five, enemies of the Teen Titans.

Dr. Simon Jones, alias Psimon, was a physicist working on experiments in contacting other dimensions when he was contacted in turn by the demon Trigon the Terrible, the father of Teen Titan Raven. Trigon used his abilities to transform Jones into a powerful psychic with telepathic and telekinetic powers, and told him to destroy the Earth. Finding an ad by the psychopathic Dr. Light in the Underworld Star, Jones, now calling himself Psimon, joined Light's new group, the Fearsome Five, hoping to fulfill his mission. He usurped Light's role as the team's leader during their first battle against the Teen Titans, in which he telepathically planted the suggestion in their minds to kill the Justice League. The plan failed, however, and the Five were defeated.

Trigon, growing impatient with Psimon's lack of progress, banished his psychic minion to another dimension.[1] The remaining members of the Five attacked the Titans at their new headquarters, Titans Tower, and used their dimensional transmitter to return their teammate to Earth, but they were subsequently imprisoned.[2]

Psimon's teammate Gizmo eventually broke the team out of prison, and Psimon, now acting as team leader, led the Five in kidnapping Dr. Helga Jace in order to force her to make them an army of "Mud Men" to aid them in their battles. They were again defeated, this time by the combined forces of Batman, the Outsiders, and the Teen Titans.

Psimon later allied himself with the immortal dimensional traveler known as the Monitor during the Crisis on Infinite Earths. During this, the rest of the Five, feeling betrayed by Psimon, turned on him, apparently killing him. Psimon was rescued by Brainiac and the Earth-One Lex Luthor, saved from the Anti-Monitor's Shadow Demons and recruited for their multi-world-conquering Villain Army. He became suspicious of the two villains' plans, and learning that they were going to take over the worlds by themselves once the heroes and villains were wiped out, attacked the two. He apparently destroyed Brainiac and went to finish off Luthor, only to have his brain blasted away by a recreated Brainiac.

He later turned up alive, cutting a swath of destruction through another star system far from Earth, devastating the planets of Kallas and Talyn (home of Jarras Minion). He returned to Earth to seek revenge on those who wronged him. Finding his former teammates Mammoth and Shimmer at a Tibetan monastery, having renounced a life of crime, he attacked them, driving a spear through Mammoth's head, and turning Shimmer into glass and then shattering her. When he found Gizmo, he shrunk the diminutive inventor down to subatomic size. He then attacked and psychically tortured the Teen Titans, but was defeated and placed in the custody of the Darkstars, and later imprisoned in The Slab, after which his powers were apparently diminished.

He managed to engineer a massive prison breakout and escape, when Brother Blood took over the prison in an attempt to activate a global satellite system.[3] 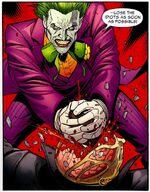 Psimon's death by the Joker.

Psimon later joined up with frequent Captain Marvel archenemy Dr. Sivana, who freed Psimon's former teammates Mammoth, Gizmo and Jinx from prison, and was able to successfully restore Shimmer's shattered form, returning her to life. Despite lingering animosity between Psimon and Mammoth, Sivana put the team to work for him in a scheme to short sell Lexcorp stock by having them steal accounts from its corporate building in Metropolis, and then driving down the stock by killing all the people in the building, and destroying two other Lexcorp properties. At the latter of the two, a microchip processor factory of Lexcorp's subsidiary, Kellacor, the Five were confronted by the Outsiders.

After escaping, the Five urged Sivana to take Lexcorp's nuclear missile facility near Joshua Tree, California. When Sivana refused, Psimon asserted that they would take it anyway, and in response, Sivana killed Gizmo with a laser blast to the head, and severed relations with the remaining four, warning them that he would kill them if they ever crossed his path again. The Five decided to initiate the plan themselves, but were defeated before they could obliterate Canada. Mammoth was returned to the Metahuman prison on Alcatraz Island, but Psimon and the others escaped.

Most recently, he was seen among the new Injustice League. When numerous villains are exiled to a savage alien world, he attempts to convince his fellow super-villains that escape is impossible, and then proceeds to lay down plans for beginning a new civilization. He was interrupted by the Joker, who murdered him by smashing his brain in with a rock repeatedly.[4]

Retrieved from "https://dc.fandom.com/wiki/Simon_Jones_(New_Earth)?oldid=2734616"
Community content is available under CC-BY-SA unless otherwise noted.