If half of these reports are true, he's one of the deadliest men to ever carry a weapon.

Slade Wilson was a mercenary known as Deathstroke wanted by Interpol.

While little information is available on the sword for hire, Interpol's files portray him having an impressive and bloody career behind him, with Commissioner James Gordon remarking he was one of the deadliest armed men he had known.[1]

He and his partner Sunny were contracted by Lex Luthor to kill Batman. In order to hide his true goals from his quarry, he tried to get close to Batgirl and Robin, trying to recruit them to his side.[1][2] In order to achieve this, Sunny gave Clayface a fake antidote for his condition, causing him to go into a rampage with the Bat-Family trying to take him down. Deathstroke intervened and rescued Robin from him in order to gain their trust.[1]

Batman however didn't trust the mercenary and also later warns his protégés against trusting him. Slade first unsuccessfully tried flattering Barbara at first for handling Roxy Rocket and also pointed to her about someone secretly watching them.[1] He later successfully gained Robin's attention while the latter was out on patrol and pretended to chase after Firefly. Sunny, disguised as Firefly, then attacks the duo as per Deathstroke's plan, but is forced to flee after Batman intervenes and beats her up.[2][3] 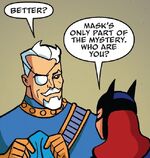 When Batman asks Slade about his business in Gotham City, the latter claims to be tracking down Firefly so as to stop him from mounting a massive terror attack for Kobra. Back at his hideout, Sunny complains to him that his plan didn't involve fighting Batman so soon, but he tells her to think of it as practice. Luthor then talks to him and complains about him wasting time, but Deathstroke states he was just being cautious and promises to kill Batman in 24 hours.[2]

Deathstroke tricked Batman by claiming he was going after Firefly and took him to the Tri-State dam, which he had rigged with explosives. Bruce came upon Firefly again as he investigated the area, but had grown suspicious of their identity since Firefly wasn't acting like he was supposed to. The villain fell from a great height after he froze him up and he found that the person in the armor wasn't the real Firefly.[4]

After realizing he had been baited, Batman was attacked by Deathstroke and pretended to struggle in defeating him. This however allowed Batgirl and Robin, who found their way to the dam after their mystery stalker gave the former a clue, to finally discover that Slade was a bad guy all along. This distraction allowed Batman to set Deathstroke on fire, which made him take off his suit and gave Batman a chance to knock him out.[4]

He was later released from prison along with Sunny after bribing the authorities and rescued Jason Todd, who had earlier been watching them. Telling the young man to rest, he told him he would make a fine new recruit and could find a new family amidst them.[5]

Retrieved from "https://dc.fandom.com/wiki/Slade_Wilson_(DCAU)?oldid=2806133"
Community content is available under CC-BY-SA unless otherwise noted.