Solis is one of the New Gods of New Genesis. As a boy he established a close friendship with fellow New God Orion, who comforted Solis after the death of his older brother. One day Orion and Solis discovered a large hole on the surface of New Genesis which turned out to be an outpost of soldiers from the planet Apokolips. These soldiers had been transformed by an energy bomb into beings composed entirely of solar energy. They bombarded Solis with energy blasts, but Orion was able to fight them off with the aid of his mentor Metron. Solis lay in a coma for a month, but upon recovering realized that he had somehow gained solar energy powers. Solis mastered these abilities and renamed himself Lightray. Lightray has remained a close ally of Orion in the battle against Apokolips. Lightray's peaceful nature is a natural foil for Orion's sudden fits of rage.

Six months after alerting Superman to an Apokoliptian incursion and aiding him in the fight, Lightray greeted an assembly of Earth's heroes to New Genesis regarding a threat to the universe, along with Highfather, Orion and Darkseid. Metron had unwittingly unleashed four Aspects of the Anti-Life Entity which would destroy all existence if they did not work together to stop it.[1] Lightray was partnered with Starfire—who privately considered him to be conceited—to hunt down the Aspect on Rann. The Aspect had infected the Rannians with madness, but they found an ally in Adam Strange who led them to an industrial factory outside of Ranagar where they discovered a huge doomsday device. Strange was knocked unconscious when the separated to located the Aspect,[2] and Lightray left his partner alone with Strange to track the Aspect with his electromagnetic vision. He followed the trail back to the stellar disruptor and found Starfire also knocked out by the Aspect which had possessed a shapeshifting creature from Rann. Lightray couldn't land a single blast on the slick ooze and was incapacitated as the timer on the bomb ticked down. He recovered just before the clock had run out to see Starfire in the grasp of the petroleum-based life form and made one last effort to save Rann, but Starfire was only playing possum, and ignited the creature with her flame before rescuing Lightray from the following explosion that also destroyed the doomsday bomb.[3]

Lightray served one stint as a member of the Justice League. He joined the international branch along with Orion on the same night as a membership drive failed to find other new recruits. [4] The difference between the two was illustrated in battle. While Lightray desired a minimum of fuss in battle by dispatching his foe, Crowbar, with a simple expenditure of energy to the man's face while, Orion preferred to destroy the pavement around Blackrock — and then was angered when his opponent surrendered instead of fighting to the death.[5] 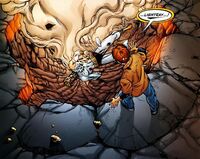 Lightray has demonstrated a knowledge of chess. Lightray's long hair caused him to be mistaken for a female by the old fashioned General Glory. They stayed with the team until just after the battle with General Glory's old foe the Evil Eye.[6]

As Solis his idea of fun was protecting New Genesis from Apokolips, Darkseid, and his minions. He resided on New Genesis and was active in adventuring.

Lightray fell to Earth during a meteor shower, creating a crater in the streets of Metropolis. Gravely injured, he was found by Jimmy Olsen. He grabbed the young reporter, said the word "infinite", and after a large flash of light, apparently died.[7] He was resurrected along with the other New Gods on the Fifth World.

Retrieved from "https://dc.fandom.com/wiki/Solis_(New_Earth)?oldid=2502573"
Community content is available under CC-BY-SA unless otherwise noted.