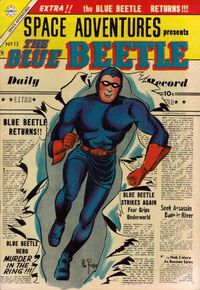 Space Adventures was a science-fiction anthology comic published by Charlton. It was renamed to War at Sea at #22. The series' name was later reused for a second volume.

The only issues indexed in this database are #13-14, the issues featuring the Fox Blue Beetle, a character DC Comics would later buy from Charlton.

Retrieved from "https://dc.fandom.com/wiki/Space_Adventures_Vol_1?oldid=2361657"
Community content is available under CC-BY-SA unless otherwise noted.