Space Ranger, Guardian of the Solar System, is a space-traveling adventurer and super-hero in the 22nd Century. He is an expert pilot, marksman, scientist and detective with an arsenal of futuristic gadgets and weaponry. Working as an executive at his father Thaddeus Starr's company Allied Solar Enterprises, he lives a double-life protecting Earth from invaders and other threats using his ship the Solar King. His secret identity is only known to shape-shifting alien sidekick Cryll and girlfriend Myra Mason. Space Ranger was created by Edmond Hamilton, Gardner Fox and Bob Brown, first appearing in Showcase #15. (1958) 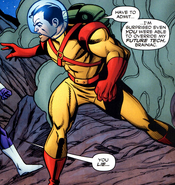 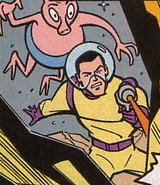 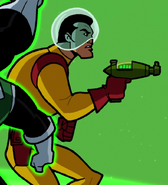 Rick Starr
Other Media
The Brave and the Bold
Community content is available under CC-BY-SA unless otherwise noted.
Advertisement