"Major Arcana - Story One: Willie & Fingers": Jim Corrigan discusses the role of Spectre as the embodiment of death for all who choose to murder. Corrigan insists that there is no need to "punish" killers with death, but Spectre sees things di

The living still kill, and they must face the consequences. Me

Jim Corrigan discusses the role of Spectre as the embodiment of death for all who choose to murder. Corrigan insists that there is no need to "punish" killers with death, but Spectre sees things differently. Corrigan then suggests that Spectre's "quantal consciousness" might be actually prompting killers to act, giving Spectre full responsibility for the crimes he punishes. Spectre chooses not to answer such accusuation, but acknowledges he has thought about it, before entering Corrigan's body again at the break of dawn.

Elsewhere, a common thief goes into action and steals a wallet from someone in the crowded streets. The man goes to a dirty alley to take the money from the wallet, unaware that close to him is an object of great dark power. From what seems to be a crystal ball, comes something powerful and sinister, while the thief keeps counting the money. Seconds later, a voice talks to the thief, calling out his lack of skills and ambition to achieve greater hits. The voice belongs to a small demon, who calls himself Fingers. He knows the thief's name is Willie and tells him that with his help, they can perform greater crimes and Willie agrees to cooperate with Fingers, who finds the hot summer day very cold. After giving the crystal ball from which he came to Willie, Fingers steals the clothing of an action figure from a boy, while also teaching him the ugly truth about war.

Morning comes fast and Kim Liang arrives to Corrigan's office, only to find the private detective consumed by the many global concerns and those of his own life, like the fact he hasn't gotten a case in three months and that their relation has seemingly died. Kim quickly changes the conversation and points out that she feels they are both needed downstairs at Madame Xanadu's Parlor. Upon descending, they notice that everything inside the Parlor is upside-down and topsy-turvy. Spectre leaves Corrigan's body and they all find Madame Xanadu inside a sarcophagus. She explains that a man had come to have the cards read to him, but the session had gone awry as Xanadu could not figure out the cards and their apparent conflictive meaning. After the stranger had left the parlor, the cards reacted violently, unleashing hellish powers. Xanadu had entered the sarcophagus to gather the hostile energies and prevent them from expanding. However, during the events, three powerful items had escaped and vanished from her possession. An Egyptian amulet, an ornate censer and a figurine holding a crystal sphere. All three items are source of danger and evil in the wrong hands. With this information, Xanadu sends Jim, Kim and Spectre on the hunt for the items to be returned to her before something terrible is unleashed in the world.

Unknown to them, Fingers, the demon from the crystal sphere, is keeping his promise to Willie and is helping the thief achieve greater thefts and robberies, using his powers. After a series of successful crimes, Willie gets suspicious and asks Fingers what does he want in exchange for helping him and Finger slyly replies that all he wants is a life.

On the streets, Spectre turns into the green mist he calls the "quantal consciousness" in order to find a human that has come close to the dark items, while Jim and Kim follow the mist across the streets. At that moment, Fingers helps Willie break into a warehouse, but after the demon opens the doors from the inside, he realizes that Willie has vanished. Willie doesn't want to be part of a murder, much less of his own and he decides to abandon the demon while he still can. Spectre soon picks up Willie's consciousness and guides Jim and Kim to the desperate man. Willie tries to explain the situation to them, but they can barely make any sense of what he's saying. They decide to take Willie to Kim's place, where he should be safe until Spectre finds a way to help Willie. However, unnoticed, Fingers already knows their plan and he decides to make Willie suffer for his bold, yet dumb attempt.

Upon arriving at Kim's place, Jim makes some snarky remarks about her decorations, which makes Willie mad, considering the situation at hand. Willie then gives the crystal sphere to Jim, while the green mist enters the appartment without anyone noticing. Suddenly, they hear a noise coming from Kim's closet and when she opens it, her cat comes out in total fear, as Fingers rides in the animal's back. Jim attempts to catch the animal, but all he manages is to get his face scratched, while Fingers apparently vanishes. Willie gets nervous and grabs a knife from Kim's kitchen, but before anyone could react, Fingers drops on Willie's forehead, breaking inside the man's skull entirely. Willie then is forced to commit suicide with the knife he had grabbed and just a few seconds after he stabbed himself in the chest, his head breaks in two, while Fingers comes out of the corpse. 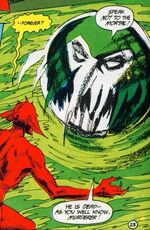 The demon has grown larger after taking the thief's life and demands that Jim returns the crystal sphere. Corrigan refuses, but the demon slaps him, knocking him to the ground and taking the sphere by force. As all this happens, the only question in Jim and Kim's minds is "where is Spectre?" Almost as in answer, the Spirit of Vengeance appears inside the crystal sphere that the demon intended to use to achieve eternal freedom. Spectre comes from the sphere and demands to know who unleashed the demon and took the sphere from Xanadu's power, but the demon refuses to answer and slashes at the Spectre, which causes the Spirit of Vengeance to vanish. The Demon believes he has defeated Spectre, but as he reaches the crystal sphere, it grows enourmously and Spectre's face appears in it, with a mouth of splintered shards that devours the demon entirely before returning to its normal size.

Corrigan is glad that they've found at least one of the three items, but Spectre expects nothing but more horrors before they find the other two. And to make things worse, Xanadu has apparently lost control of the hellish chaos unleashed in her parlor.

Retrieved from "https://dc.fandom.com/wiki/Spectre_Vol_2_12?oldid=2701657"
Community content is available under CC-BY-SA unless otherwise noted.