"Every Cop A Criminal": Somewhere in New York City, a pusher and a cop die at the same time and somehow, the essence of Spectre is involved.

"Every Cop A Criminal"

Every Cop A Criminal

Stand back, Corrigan... for they are mine now, and their blood may become... unruly.


Appearing in "Every Cop A Criminal"

Synopsis for "Every Cop A Criminal"

Somewhere in New York City, a pusher and a cop die at the same time and somehow, the essence of Spectre is involved.

Later, Pete Quarral contacts Jim Corrigan to tell him about his concerns for the recent string of deaths concerning pushers, drug dealers and cops, all seemingly connected. Quarral suspects that some of his colleagues at the NYPD might be behind the drug trade of the city and he asks Corrigan to become his backup the night he will interrogate one of the cops.

Corrigan agrees and goes to the place where Quarral meets the narcotics agent, who is indeed working the drug trade in the city. The situation soon turns violent and Corrigan helps Quarral against the corrupt agent and his unknown associate. The corrupt agent and his aide are killed, but before they die, Quarral manages to get the name of the cop who is organizing the drug trade: his former partner Frank Groschen.

The next day, Quarral and Corrigan track down Groschen and go to his boathouse in Long Island and find his massive stash of cocaine. The two of them wait for hours until Groschen shows up and confronts the cops with two henchmen. Quarral asks Groschen why he chose to go into crime and Groschen reveals that it was his only choice after his wife was killed by the organized crime in revenge for his actions against them. Groschen decides the conversation is over and tells his armed henchmen to eliminate Quarral and Corrigan, but as they get ready to shoot, Spectre comes out of Corrigan's body and using his powers, he deals with the armed thugs, possessing their weapons, disarming them before grabbing them by the neck and spins their bodies violently until they explode. 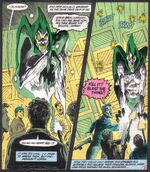 Stricken by horror, Groschen tries to escape on his boat, but Spectre reaches the man in the middle of the water and possesses the vehicle, making it explode. The criminals meet their ends and although that was Quarral's intentions by asking Corrigan to go along with him, he didn't knew the magnitude of Spectre's methods. When Spectre returns to Corrigan, he explains that everything that happened was part of his plan and when Quarral realizes he has been used by the spirit, he blames Corrigan for the outcome. This causes Corrigan to lose his temper, just as the NYPD arrives at the crime scene. Corrigan punches Quarral in the face and turns around to confront the officers that just arrived, but his violent reaction startled the officers, who shoot at Corrigan and the bullet goes straight through his head, killing him yet again.

Retrieved from "https://dc.fandom.com/wiki/Spectre_Vol_2_17?oldid=2516578"
Community content is available under CC-BY-SA unless otherwise noted.