"Zombie Transit": Jim Corrigan is shot in the head by some police officers, who arrived at the scene after being called to investigate gunfire. Pete Quarral explains the situation to them and how they wrongly killed an innocent man.

Wrong, Corrigan! Our relationship has undergone a severe change... but I did succeed! My sacrifice was not a failure, for we both survive, even if only one at a time now-- sharing one entity... and the same body!

Jim Corrigan is shot in the head by some police officers, who arrived at the scene after being called to investigate gunfire. Pete Quarral explains the situation to them and how they wrongly killed an innocent man.

The corpse of Corrigan is taken to the hospital, where a distressed Pete Quarral inquires the fate of the body. The doctors explain that it will remain at the hospital until it can be taken to the autopsy room to determine the cause of death, as the law indicates. In the meantime, Spectre attempts to take the body out of the hospital, but realizes it is the wrong approach to preserve Corrigan's life. After causing a horror scene in the hospital, Spectre returns to Madame Xanadu's Parlor, where he comes to terms with the fact that Corrigan's life has ended. However, Spectre is determined to find a way to remain on Earth, for the sake of his love for Xanadu.

At that moment, Kim Liang arrives at the hospital and learns the truth thanks to Quarral and they determine that they must prevent the doctors from performing the autopsy, as to avoid causing more damage to Corrigan's body in case Spectre succeeds in bringing him back to life.

In the meantime, Corrigan's soul reaches Purgatory where he meets the Phantom Stranger, who will take him to the afterlife. Corrigan is glad that his life is over, as he knows it would mean the end of Spectre's murderous activities. However, Spectre is racing towards the hospital and possesses Corrigan's corpse, much to the coroner's shock. Through the corpse, Spectre reaches Purgatory to prevent Corrigan from passing. Furious, Corrigan attacks Spectre and realizes the spirit can be injured in that realm. Corrigan decides to take out all his frustrations against Spectre and the two of them start fighting. As they do this, Corrigan's corpse rises, takes the fainted coroner's clothes and walks out of the hospital, as a perfect zombie.

Kim and Quarral realize Corrigan's corpse is gone and they follow the trail of panic, horror and destruction left by the zombie, who is on his way to Greenwich Village through the subway system of New York. Meanwhile, Corrigan and Spectre continue fighting, but Spectre gets the upper hand and punishes Corrigan, trying to convince him that preventing his death is the best path for both of them.

The Corrigan zombie makes his way back to New York, dealing with confused police officers, scared civilians and terrified criminals. When Kim and Quarral deduce Corrigan's destination, they hurry back to Greenwich village, where they expect to find the walking dead. Finally, Corrigan is defeated by Spectre in Purgatory, but upon his victory, he vanishes and allows Corrigan to return to life. The Phantom Stranger explains that Spectre sacrificed his existence in order to allow Corrigan to survive and Corrigan gladly returns to the land of the living. 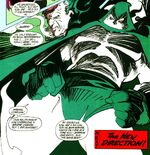 The Corrigan zombie arrives to his office in Greenwich Village, but as he is about to enter, he recovers his consciousness and realizes that his wounds have disappeared. Corrigan is back among the living and all thanks to Spectre's sacrifice. When Corrigan enters the building, he is greeted by Kim, who is more than glad to see him, but below them, Xanadu knows that even though things have changed drastically, everything remains the same. When Corrigan is explaining the situation to Kim, he realizes that it has not been 48 since he died, and ergo, Spectre couldn't have just vanished. It is then that his body starts a painful transformation and realizes that Spectre sacrificed his separate existence, but he continues to live inside Corrigan and now, they have gone back to how things were in the past, where they shared the same body, but can only manifest one at a time.

Retrieved from "https://dc.fandom.com/wiki/Spectre_Vol_2_18?oldid=2658709"
Community content is available under CC-BY-SA unless otherwise noted.