I am damned, Corrigan... whether I obey my charge or follow your conscience... Either way, I'm damned... because you were right.


Appearing in "The Lacquer Look"

Synopsis for "The Lacquer Look"

It's night in New York City and a young model ends a photoshoot at a professional studio run by photographer, Geravis and wearing what the man calls "The Lacquer Look". As soon as the photoshoot is over, Geravis tells the model to leave his studio as he is about to close. Not giving the woman any chance to remove the heavy make-up or the large earrings provided, she takes off to the streets, hoping for the best. As she walks down the streets, she is grabbed from behind and dragged into a dark alleway, where she is killed and brutalized by an unknown figure and then tossed into a trash container. 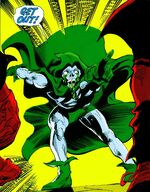 At that moment, Jim Corrigan finds himself on a dinner date with his lovely assistant, Kim Liang and they discuss about Corrigan's current state with Spectre and the role Madame Xanadu has to play in the grand scheme of Spectre's mission. Although Jim believes that Kim is also part of the larger scheme, she believes that she simply stumbled upon the most crazy situation. Meanwhile, Spectre finds himself clearing an abandoned house from young punks who invaded the place, breaking the sacred enviroment with the purpose of defiling the place. Spectre starts his journey back to his human host after scaring the young teens out of the place.

Jim and Kim return to Madame X's Shop and Jim inquires about her reasons to assist Spectre in his quest to recover his former powers. The sorceress replies that her duty is to provide advice for the Spectre and prevent him from steering away from his holy mission, but she also tells him that he is the only one who can actually have some dominance over Spectre. After the conversation, Madame X informs Jim that an unstable man had come to her and delivered a box with a recently maimed ear inside. She suspects the man was responsible for the crime, but he left without explanation. Jim examines the evidence and notices a large earring, just as Spectre arrives at the place.

When Spectre learns about the crime, he uses his powers to reach the victim's soul in limbo as it awaits to be taken to the afterlife. After getting the details of the murder, Spectre locates the body of the model, which has been taken to a landfill near Long Island. Spectre returns to Jim and informs him about the situation before going into his body to recover his strength. Soon, Jim contacts Detective Peter Quarral and tips him about the crime, allowing the police to locate not only the latest body, but also previous victims of the same murderer.

Learning that all the victims were models who were contacted by Geravis the photographer, Spectre decides to deliver holy retribution, but Corrigan stops him and tells him a story about a murderer, who was shot down by the police and during the autopsy, they found that he had a brain tumor which caused his random outbursts of violence, causing him to kill people. When asked if the man deserved to be killed, Spectre doesn't reply and leaves the building. Knowing the man's fate has been sealed, Kim Liang comes with a plan to pose as a model and reach the photographer before the Spectre.

Jim and Kim go to the photo studio, but Spectre has already reached the building and confirmed the man's guilt in the crimes. However, Geravis is not currently at the studio and they have to wait until he arrives. Later, the man arrives and Kim poses as a model, but Spectre is nowhere to be found. The photoshoot goes smoothly and Kim has to wear the Lacquer Look. As she leaves the studio, a man approaches her and Jim reacts instantly. However, the man's honest reaction lets them know that he is not the killer, but instead, a lonely sad man, who left his wife hoping to find a date with a hooker. Knowing that they blew their chance to find the killer, Jim and Kim return to the office, defeated.

Inside the studio, however, Geravis struggles against himself to fight the urge of going after Kim and murder her as he did the previous models. Finally giving into his gruesome impulses, the photographer decides to strike, but he is stopped by the Spectre, who has possessed a manikin and knocks the man unconscious. When the photographer recovers, he is confronted by Spectre, but he believes he's gone insane and he jumps through the window of the old abandoned house that Spectre clearned earlier and dies.

Spectre then goes to limbo, where he learns the tormented past of the man's life and the path that drove him to become a killer. Afterwards, Jim Corrigan awaits for Spectre to return and when the spirit of vengeance finally comes to him, he comes to the realization that Corrigan's judgement is right and his holy crusade is not rightfully justified. Elsewhere in New York, a store owner realizes a manikin has been robbed from his store.

Retrieved from "https://dc.fandom.com/wiki/Spectre_Vol_2_4?oldid=2516602"
Community content is available under CC-BY-SA unless otherwise noted.