Appearing in "Pieces of Zatanna"

Synopsis for "Pieces of Zatanna" 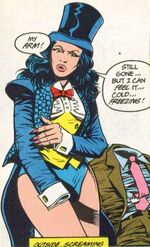 A magic show takes place in a small bar of Greenwich Village and the main act is Zatanna, the Mistress of Magic, who has come back to her stage career after a short retirement. The stage is ready for her, but when she is about to start her performance, her right arm disappears in front of the crowd, who cheer for the illusion. Unfortunately for Zatanna, this is not part of her act, but she remains calm and tries to use her own magic to counter the strange events, only to find that her magic is futile. Soon, an inter-dimensional portal opens behind Zatanna, much to her concern and the audience's amusement. However, the feeling of joy of the crowd soon turns sour when Demons start crawling out of the portal and attack the audience with fireballs as the ceiling is gushed with blood. Zatanna tries once again to use her magic to send the demons back through the portal and close the thing before making the blood from the ceiling put out the fire in the place. Surprisingly, her magic works in this occasion, but she is still unable to summon her arm back from wherever it went.

Zatanna quickly reaches backstage to talk with Adam, only to find his headless body sprawled in a chair. At that moment, Adam's head is in possession of the demon Wotan in Limbo, where he hopes to use Adam's head to extract his Homo Magi essence, but when Wotan finds out Adam is merely a mortal, he destroys the head and in the backstage, his body turns to dust before Zatanna's eyes. Wotan then uses Zatanna's arm, which belongs to a true homo magi and tampers with the limber, while back on Earth, the Mistress of Magic feels cold running through her arm, although it is still missing from her body. At that moment in Greenwich Village, Ghast and Rath crawl from a sewer manhole and start searching Zatanna's arm, following Wotan's instructions, who has sent the limb back to Earth. The creatures find the arm in a trash can and Wotan tells them where they have to take the limb, while Zatanna walks away from the bar through the back door, weakened and unsure of what to do next.

Three weeks later, Zatanna walks into Madame Xanadu's parlor, desperately seeking for help. Zatanna tries to explain herself, but Madame X notices Zatanna's arm missing, only this time, it is her left arm. Zatanna starts explaining that after her right arm disappeared, it eventually came back to her as suddenly as it had disappeared, although she could still feel her arm when it was gone. However, Zatanna noticed something different and strange in her arm, knowing that if it that was her arm, something was changed. Shortly afterwards, Zatanna's left leg vanished and returned just as her arm did. When her right arm disappeared, she knew she needed help and came directly to Madame X, who asks Zatanna for a more complete background of the situation. Zatanna recounts the events in which his father, Zatara sacrificed to save her and how ever since, she has been haunted by his voice. Zatanna also tells her about her background with Adam, who was partially responsible for Zatara's voice haunting her and also for wanting to learn the secrets of the homo magi DNA. Adam was transformed and turned into Zatanna's confident, helping her resume her stage career, but during her first comeback show, the strange events started and since then, she has had visions about an evil green face connected to an ancient Egyptian tomb. Zatanna stops her story as her arm is coming back to her and Madame X realizes that this case is too much for her to handle and she summons help from the people upstairs. 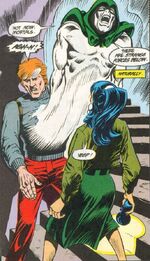 In his office, Jim Corrigan takes a gumball from his machine, still suspicios about possible demonic presences inside them. However, as he takes a bite of the gumball, he is startled by his assistant Kim Liang, who informs him about Madame X's request to see them. Corrigan spits the gumball and the thing lands on the floor, where it is sniffed by a small mouse. On their way downstairs, Kim and Jim recall their past romantic encounter in the same place, but as they are drawn closer to each other once again, Spectre bursts out of Corrigan's body, claiming that there is an evil presence around them.

Spectre goes directly towards Madame X's office, where Zatanna is shocked to know that the fortune teller has connections with the spirit of vengeance. Jim and Kim arrive shortly afterwards and after a quick introduction, Zatanna tells them about her plight. After she is done telling her story, Spectre inquires about the nature of Zatara's telepathic voice and Zatanna is sure that it is her father, reaching her from the afterlife. As Spectre leaves the building to make sure about Zatanna's claims, the Maid of Magic loses her right leg, as it vanishes into thin air. With help from Corrigan and Madame X, Zatanna is taken to the fortune teller's private chambers, where she would rest until Spectre's return.

In the meantime, Spectre has reached the City Morgue and after locating a recently deceased corpse, he reaches Purgatory through the man's soul. There, he is greeted by the Phantom Stranger and Spectre asks him about Zatara's soul. The Stranger replies that Zatara has never reached the afterlife and Spectre suspects that his soul was most likely intercepted and trapped elsewhere. Stranger guides the Spectre towards Limbo, but he has other pressing matters with one Bruce Gordon. Spectre flows through a portal into an eternal Limbo and starts looking for Zatara.

Meanwhile on Earth, a man from Brooklyn starts his day as usual, but is shocked to find a woman's leg in his cupboard. It is then that Ghast and Rath break into the man's place and take the leg with them, much to the man's amazement. After the creatures have retrieved the leg, Zatanna's leg returns to her body, but as usual, she notices there's something different to it. And as Zatanna's limbs have all been affected, Wotan continues tranferring his energies using the magician's limbs.

Several hours later, Corrigan takes a nap, but is disturbed by a ringing phone. Lieutenant Peter Quarral has contacted Corrigan because there is a strange report that fits much with the kind of things Corrigan is used to deal with. The report is about the Brooklyn man, who has told the police what happened in his home and Corrigan is intrigued enough to offer Quarral a temporal alliance in order to investigate the case together. Although Quarral initially refused, he ended up accepting the offer. At that moment in Limbo, Spectre gives up the quest of finding Zatara, knowing that he has to return to Corrigan's body, although he was unaware of how close he was to finding Wotan.

Before joining Quarral, Corrigan also learns about a homeless man's claims about "martians" tearing a woman, limb from limb. Later, Corrigan and Quarral interrogate the man in Brooklyn, who tells them about the hideous creatures that took the woman leg from his home. Corrigan and Quarral then find the homeless man and learn his version of the events he witnessed when the "martians" took a woman's arm and went down into the sewer manhole near the museum. Quarral and Corrigan go to the museum and thanks to Quarral's official credentials, they are given permission to investigate inside the place.

Piece by piece
Corrigan leads the investigation towards the Egyptian area as he has made the connection with the Egyptian tomb that Zatanna mentioned earlier. Shockingly, when they enter the area, they find four limbs, two arms and two legs, floating in mid air, but somehow connected to an invisible body. At that moment back at Madame X's parlor, Zatanna's torso disappears from her body and a torso starts to appear in the museum's disembodied limbs. Corrigan and Quarral are utterly shocked when the torso that appears and connects the body is that of a green demon, who claims that he is coming soon.

Retrieved from "https://dc.fandom.com/wiki/Spectre_Vol_2_7?oldid=2516604"
Community content is available under CC-BY-SA unless otherwise noted.