Lawrence "Crusher" Crock is the Sportsmaster, a criminal who commits crimes using sports equipment. A former star athlete who was banned from playing professionally for cheating, Crock adopted a mask and instead chose a life of crime, where he would never have to play fair ever again. Crock was killed by the Human Flame after Final Crisis, but his death was retconned with the introduction of the New 52. He has been associated with the Injustice Society. Sportsmaster was created by John Broome and Irwin Hasen, first appearing in All-American Comics #85. (1947) 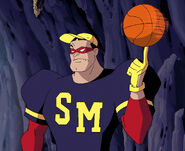 Lawrence Crock
TV Series
Batman: The Brave and the Bold