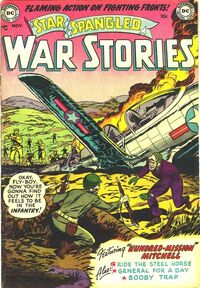 Star-Spangled War Stories was an ongoing anthology title spotlighting stories that take place during various historical wars. Many of these stories centered on events surrounding World War II. This series replaced Star-Spangled Comics, which ended with issue #130, and therefore Star-Spangled War Stories began with #131. However, due to postal regulations, after issue #133 the numbering was reset to #3. Starting with issue #205, the series was retitled Unknown Soldier.

Retrieved from "https://dc.fandom.com/wiki/Star-Spangled_War_Stories_Vol_1?oldid=2777788"
Community content is available under CC-BY-SA unless otherwise noted.