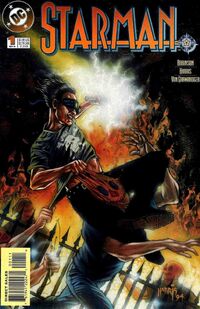 Starman (Volume 2) was published from DC Comics from October of 1994 until March of 2001. Spinning off from the inter-company crossover known as Zero Hour. It featured Jack Knight in the title role of Starman. Jack is the son of Ted Knight, the original Golden Age Starman and inventor of the Cosmic Rod. The series explored the entire history of the Starman legacy, linking together several inheritors to the mantle, including the 30th Century super-hero Star Boy. Every issue was written by James Robinson, and the title concluded with Jack Knight's retirement in issue #80. As per James Robinson's wishes, the character was also retired in a publishing sense too, though he has made small cameo appearances in subsequent titles. Issue #81 was published in 2010 as part of the Blackest Night event.

Retrieved from "https://dc.fandom.com/wiki/Starman_Vol_2?oldid=2830679"
Community content is available under CC-BY-SA unless otherwise noted.