I've been a lot of things. But I'm known most as one thing in particular. I'm the guy who found paradise...and brought a piece of it back.

Steve Trevor is an A.R.G.U.S. agent, former member of Team 7 and United States Navy SEAL. He is also the love interest of Wonder Woman. 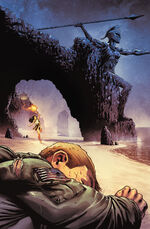 Steve is discovered by Diana after crash-landing on the island

Steve was on a mission with the U.S. Navy when his plane crash-landed on the island of Themyscira. Steve was the only survivor, and was discovered by Diana of Themyscira, badly wounded.[4] The Amazons nursed Steve back to health, while Diana in particular took a special interest in him. The Amazons held a contest to determine which among them would escort Steve back to Man's World and champion the Amazons' message of peace, and Diana eagerly won, despite being told that she could never return to the island after she left.[5]

Steve and Diana arrived on U.S. soil and Diana was quickly arrested, despite Steve's best efforts to defend her from his fellow government agents. Diana was bestowed with incredible gifts by her patron Gods of Olympus shortly thereafter, and Steve helped Diana get used to the ways of Man's World, alongside Etta Candy and Barbara Minerva.[7] Steve and Diana became romantically entangled, until Wonder Woman fought Phobos and Deimos, who altered Diana and Steve's minds. This caused them to drift apart, though they still retained feelings for one another.[8]

Sergeant Trevor was a new recruit into the counter-metahuman task force called Team 7 as his experience with Diana gave invaluable experience to the team. His first and last mission as part of the team was the infiltration and sabotage of the rogue nation dictator, Kaizen Gamorra. Steve served as the team's pilot.[9]

During this mission, Majestic created a tidal wave that swept away all of Gamorra Island.[10] John Lynch ordered Steve, Slade Wilson and Cole Cash to find a means of escape while the rest of the team held back the power mad dictator Kaizen Gamorra, who was empowered by Pandora's Box.

Steve was able to make a brief pass around to pick up what was left of the team. Making his final report after returning to base, Steve's official report stated that Team 7 had been dissolved after he'd rescued Cash, Slade and Dinah Drake. The rest of the field operatives were either presumed to be dead or missing.

Steve was later given the role of liaison from the world to the Justice League. He was a target of the media for his rumored relationship with Wonder Woman, and usually mocked for the apparent failure of it.

Steve was later captured by the villain David Graves and tortured for access codes to the Justice League's command base. Wonder Woman was visibly shaken by the sight and furiously attacked Graves, without her team's support. 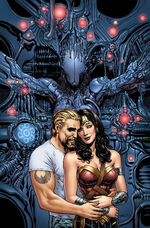 After Wonder Woman's discovery that aspects of her past had been altered, she came across Steve and some of his fellow soldiers who had been captured by Colonel Andres Cadulo. Cadulo intended to sacrifice them to the plant god Urzkartaga and become the human embodiment of the god, using Steve's body as a vessel for his transformation.[11] Diana stopped him with Steve's help, and the two soon rekindled their romance and began dating officially.[12] Steve accompanied Diana on her journey to discover the truth about her past, helping her avoid the clutches of Veronica Cale's Godwatch team in the process. Afterwards, Steve and Diana moved in together.[8]

Retrieved from "https://dc.fandom.com/wiki/Steven_Trevor_(Prime_Earth)?oldid=2797044"
Community content is available under CC-BY-SA unless otherwise noted.