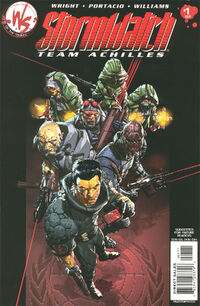 Stormwatch: Team Achilles is an American super-hero series, the third incarnation/revision of the Image comics Stormwatch.

This version was penned by Micah Ian Wright and drawn variously by Whilce Portacio, C. P. Smith, Mark Texeira, Tomm Coker, Carlos D'Anda, and Clement Sauve. The longest run for a penciler on the book was by C. P. Smith, who drew issues 11-19. The title featured covers by Portacio, Jason Pearson and Michael Golden. The book was meant to end with issue #24, which was solicited, but the issue was cancelled before it went into production, bringing the series to an end with issue #23.

Retrieved from "https://dc.fandom.com/wiki/Stormwatch:_Team_Achilles_Vol_1?oldid=2236031"
Community content is available under CC-BY-SA unless otherwise noted.